DC has an outsized concentration of extreme wealth relative to its overall population, according to a new report by the Institute on Taxation and Economic Policy (ITEP). DC makes up 0.2 percent of the country’s population but has 0.5 percent of the nation’s extreme wealth – which the report defines as net worth over $30 million. Just 0.4 percent of DC tax units (roughly 1,500 households based on the number of tax filers in 2019) have net worth over $30 million, and these same tax units hold nearly half (46 percent) of all wealth in the District. 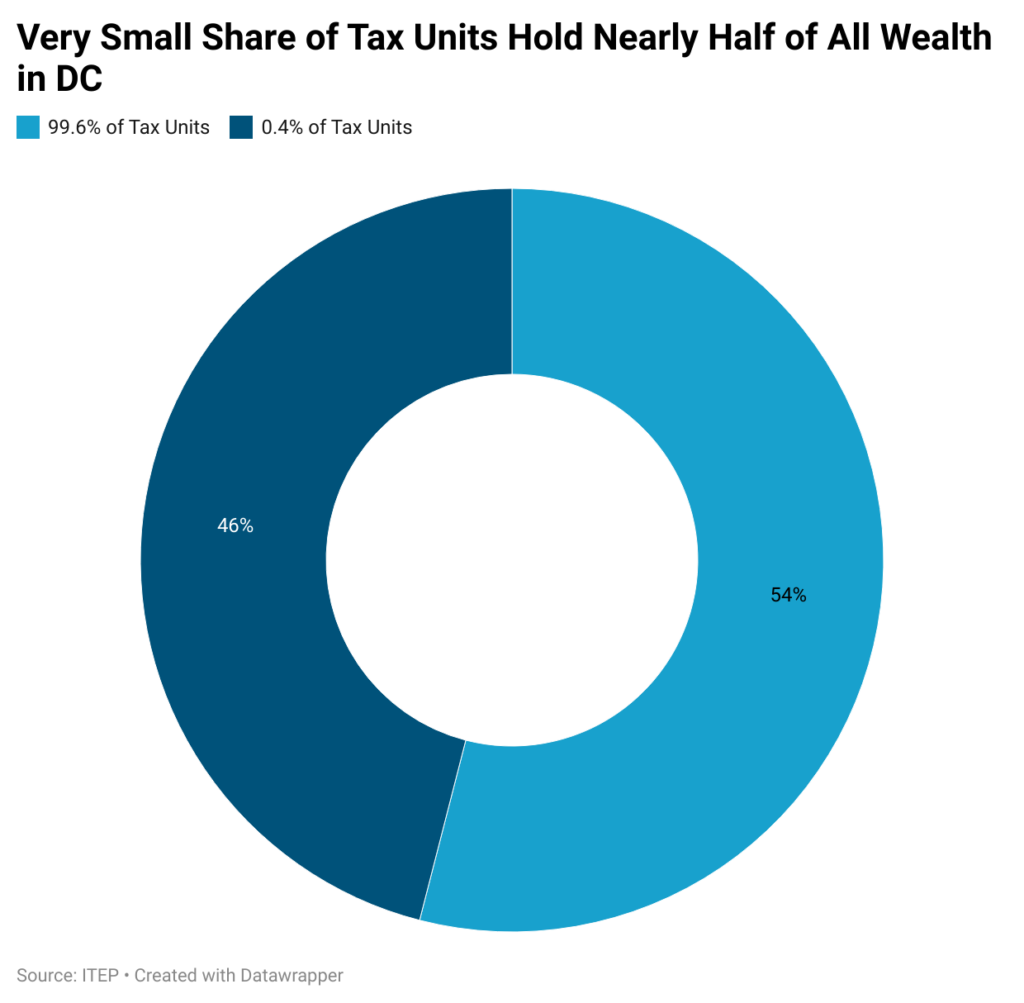 Extreme concentration of wealth creates extreme inequality that both reflects and exacerbates racial inequality and limits economic opportunities for the majority. Across the nation, 92 percent of families holding extreme wealth are white, non-Hispanic families. This is more racially skewed than the distribution of wealth overall, of which 87 percent is held by white families. In DC, white households have 81 times the wealth of Black households and 22 times the wealth of Latinx households.

The extreme and racialized concentration of wealth in the US has its roots in the stealing of Native American lands and enslavement of African people in order to cement white economic dominance. According to one new study, even if Black people had the same opportunities to build wealth as white people from Emancipation to current day, the white-to-Black per capita wealth ratio would still be three to one. The original harm of enslavement was instead reinforced and exacerbated over centuries through policies, such as Jim Crow segregation, Black codes, and tax limits and preferences, among many others, designed to systematically deny Black people and non-Black people of color access to economic opportunity and privilege white wealth.

Wealth offers people choices and opportunity, helps people endure hard times – like a major medical expense or job loss – and can be passed on to future generations. Wealth disparities are tied to racial disparities in health, income, and education. A substantial body of research (see this review of studies and additional examples here and here) finds that inequality also hampers economic growth and mobility and, conversely, suggests that policies that redistribute resources and lower levels of inequality can strengthen economies and democracies.

ITEP’s report lays out several tax policy proposals to help address the history, policies, and practices that have fueled extreme wealth inequality, many of which states could advance on their own without federal action. For example, the District could stop privileging capital gains (or the increase in value of things like stocks, bonds, and business equity) that have not been cashed in (or are “unrealized”) and get passed along to a taxpayer’s heirs.  As ITEP’s report shows, a large share of the extreme wealth held by DC residents – 39 percent –is in the form of unrealized capital gains. Right now, a person who inherits such assets and decides to cash them in would only pay taxes on the gains made while they held those assets, which means that any gains accrued since the assets’ original purchase go altogether untaxed. This tax privilege is called the “stepped-up basis” and nationally its benefits go almost entirely to the top 1 percent of households, and the lion’s share to the top 0.1 percent.

Directly taxing wealth would make DC’s tax system more progressive – meaning the greater your income and ability to pay, the greater the share of your income you pay in taxes – and racially just by ending tax privileges for wealth that is largely held by a small share of white families. It also could raise significant revenue for our schools, affordable housing, and other public services that can strengthen DC’s communities and economy. In 2021, DC lawmakers raised taxes on the city’s highest income residents to fund investments in cash for workers earning low wages, raises for early educators, and housing for residents who are homeless or on the verge of homelessness. New and strengthened taxes on extreme levels of wealth could reduce the runaway inequality we face today.

Using tax policy, lawmakers in DC can repair the harms that perpetuate inequality and make sure that every resident gets to share in the District’s growth and prosperity.