DC's EITC is Being Held Back; How Can the District Help it Reach Its Full Potential
Skip to content
Back to the Blog >
Share :
Share this...

The District’s Earned Income Tax Credit (EITC) is a tool that helps thousands of working poor families by reducing their income tax, and in many cases giving refunds that help them meet basic needs. However, DC’s EITC is less effective than those of many other states at reducing the tax burden for low and moderate income working families ‘ even though DC’s credit is one of the highest. A new report by DCFPI recommends the District can make its EITC more effective by doing two things: raising the personal exemption and standard deduction applied to income taxes and lowering tax rates for working-class households.

The District’s EITC is the second largest EITC offered by a state income tax system ‘ with a maximum credit of more than $2,000 for a single parent with two children. The DC EITC is based on the federal credit, an amount determined based on income and number of children. The DC EITC is then applied to District income tax and reduces the amount owed. The credit is refundable, meaning if the credit amount exceeds the income taxes owed, the difference is given as a tax refund.

While the District’s credit is one of the largest ‘ 40 percent of the federal EITC ‘ the report shows that low-income families in DC end up owing more income tax ‘ or getting smaller refunds ‘ than families in other states with EITCs. A single parent with two dependents and an annual income of $30,000 would owe about $40 in DC income tax, even after the EITC. That same family would receive a refund in 7 other states ‘ up to $595.

There are two reasons why the DC EITC is not as effective as other state EITC’s in providing income tax relief:

The District Exempts Less Income from Tax than Other States with EITCs. District families have more taxable income relative to most because DC’s personal exemption and standard deduction are low. The combination of personal exemptions and standard deduction for a single parent family of three was $10,700 in 2011, compared to $15,300 in the average state, and $19,600 at the federal level. More income subject to tax means greater taxes owed.

The District has High Tax Rates for Low-Income Families Relative to Other States. Between $30,000 and $40,000 of income, District 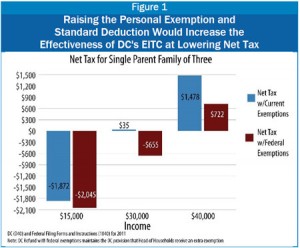 households face a marginal tax rate of six percent. The average for EITC states is between four and five percent, depending on household size.

The combination of greater shares of income subject to tax and higher tax rates means that District families face high tax liabilities before the EITC is applied. So even with a large EITC, District families end up owing more than their counterparts in other states.

One way to address this is to raise the personal exemption and standard deduction in order to decrease the amount of income subject to tax. Another possibility is to reduce the marginal tax rates for those earning below $40,000. Figure 1 shows the effect of raising the personal exemption and standard deduction to the federal levels.

These steps would reduce a family’s taxes before they claim the EITC, allowing the EITC to do its job of giving refunds to working parents so that they can take better care of their families.

How the Mayor Can Better Leverage the Bridge Fund