DC Will Collect More Tax Revenue Than Anticipated, But More Resources Are Available If DC Recaptures Federal Tax Cuts
Skip to content
Back to the Blog >
Share :
Share this...

The District will collect more tax revenue than anticipated over the next four years, according to the city’s latest revenue forecast. This reflects the impact of federal tax changes on parts of DC’s tax code that are linked to federal tax law, as well as the city’s strong economy. While this would seem to be good news for the city’s fiscal year (FY) 2019 budget, which is being developed now, some of the new revenue would come from higher DC income taxes on low-income residents, at the same time as DC’s wealthy residents are receiving large federal tax cuts. Capturing some of the $617.3 million in federal tax cuts—most of it for DC’s wealthiest—would allow the city to more adequately fund our city’s needs while making its tax code more progressive.

DC will collect $88.6 million more revenue than previously anticipated in FY 2019, according to the Office of the Chief Financial Officer (OCFO). Of that, $51.9 million is due to links between the District’s tax code and the federal code that were affected by December’s federal tax changes, as outlined in a new OCFO report. That figure is the combined effect of $56.4 million in additional income tax revenue, $2 million in additional business tax revenue, and a loss of $6.5 million from estate tax revenue. 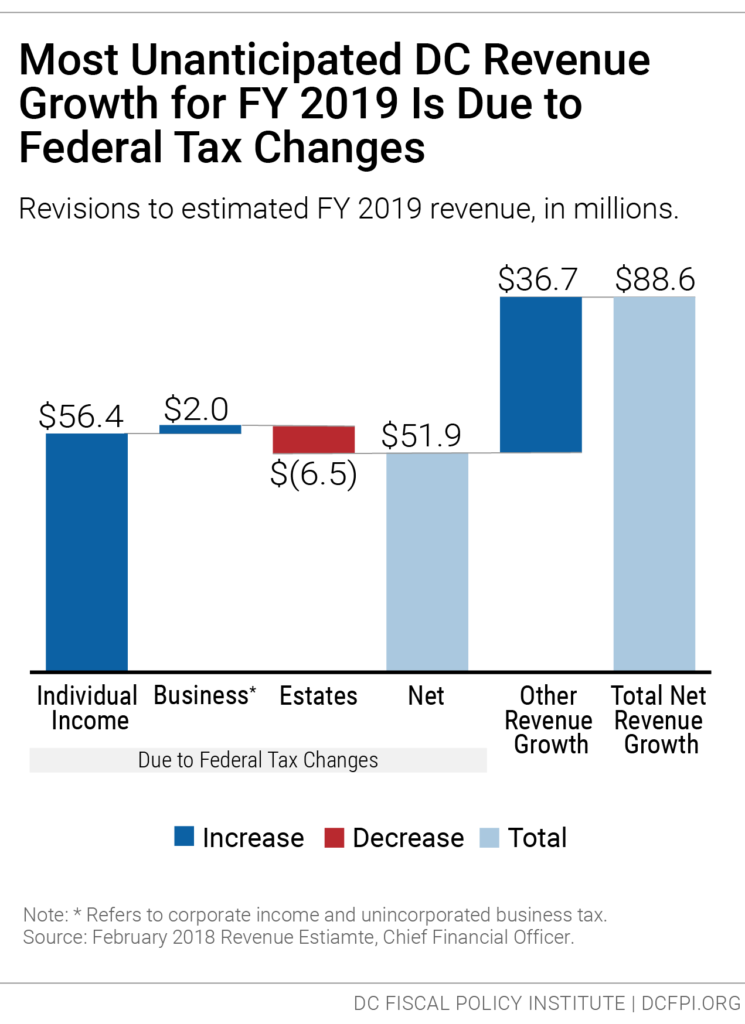 Some low-income taxpayers will owe more DC income taxes due to the elimination of the personal exemption, which is a deduction that taxpayers can take for each member of their household. While the standard deduction (another provision that reduces taxable income) was nearly doubled, this did not offset the elimination of the personal exemption for many taxpayers, especially those with multiple dependents. Residents with incomes between $25,000 and $50,000 will see a 0.4 percentage point increase in their effective DC income tax rate, more than any other income group. DC has several options for addressing this, including establishing a refundable personal credit or child tax credit, which would be significantly more valuable to low-income families than the personal exemption.

On the other side of the income scale, the heirs of wealthy residents will reap $6.5 million in DC tax cuts. Estates valued between $5 million and $11.2 million will be newly exempted from the estate tax, and estates over $11.2 million will see lower tax bills. Policymakers should act quickly to decouple DC’s estate tax from the federal law to avoid an unnecessary tax cut that will exacerbate income inequality.

The District’s response to federal tax changes should go beyond merely addressing the impact on DC’s tax code. In all, according to the OCFO, District residents will see a $617.3 million federal tax cut—much of it reaped by the city’s wealthiest residents.[i] DC taxpayers did not ask for these large federal tax cuts, or the reductions in federal services likely to accompany them. Recapturing some portion of the taxes that the federal government is giving up—by, for example, raising top marginal income tax rates on the wealthiest residents, who are seeing big cuts from federal rate reductions—would allow the District to more adequately fund city needs, such as schools and affordable housing, while leaving even our wealthiest residents no worse off than last year. Shoring up local services would also improve the city’s resilience in case of federal program cuts.

[i] While the OCFO report did not include distributional estimates of the net federal tax cut, according to a separate analysis from the Institute on Taxation and Economic Policy (ITEP), 60 percent of the cut will flow to the top 5 percent of DC taxpayers.