“What a quintessential Washington thing to do: celebrate a section of our local tax code!” That’s from Councilmember Elissa Silverman, who joined Councilmember Jack Evans this week with a ceremonial resolution to “Honor the expansion of the Schedule H Homeowner and renter property tax credit.”

Yes, the Council took time to honor a tax form.

But it’s a really important one. Schedule H helps low- and moderate-income residents when their property taxes or rents are high. And last year, participation in 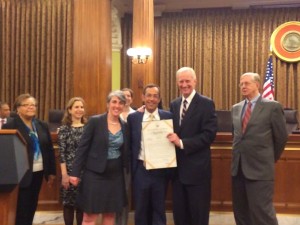 the Schedule H tax credit nearly tripled — to nearly 18,000 households — thanks to reforms adopted by the Council. It is a reminder that seemingly small things, like reducing the number of lines on a tax form, can make a real difference in the lives of residents.

Schedule H offers a tax credit when property taxes are high compared with a homeowner’s income.  This is especially important today, with many moderate-income homeowners in changing neighborhoods seeing property values and taxes rising around them. Schedule H helps renters with rising housing costs, too, because the credit allows them to claim 20 percent of their rent as property taxes passed through from their landlord.

The concept of Schedule H is great, but until recently, the reality has not been. Until 2014, residents could receive Schedule H only if their income was below $20,000. In addition, applying for Schedule H was complicated and as a result many residents simply did not apply. These were highlighted by DCFPI in a 2008 report. Other organizations, like Community Tax Aid and Legal Counsel for the Elderly, also called for Schedule H reforms.

The DC Council recognized these problems and moved to address them. Legislation adopted by the Council in 2013 increased the Schedule H income eligibility to $50,000, increased the maximum credit from $750 to $1,000, and made the credit easier to apply for.

Those changes went into effect in 2014 and showed immediate results. Over 11,000 households struggling with property tax bills or unaffordable rents got help that they had not gotten before. The number of households claiming Schedule H growing almost three-fold in one year, from 6,400 in 2013 to 17,900 in 2014. In addition, the average Schedule H credit increased from $580 to $780.

And that’s why it makes sense sometimes to honor the tax code!

You can see the resolution to salute Schedule H here.