The DC Council has the chance this week to help 22,000 DC residents working at low wages improve their ability to earn a decent income and to manage their work and family responsibilities. Legislation before the Council on Tuesday would require large restaurants and retail chains to give worker schedules two weeks in advance, and to offer part-time workers more hours before hiring new staff. DC’s restaurant and retail sectors are among the strongest parts of DC’s economy, and some of the largest chains already have adopted such practices. This suggests that the District can take this step to help workers without hurting our economy.

Last Thursday, the Committee on Business, Consumer, and Regulatory Affairs marked up the Hours and Scheduling Stability Act of 2016. This bill would help workers at large chain retailers and restaurants in the District by requiring their employers to:

The bill only applies to large companies — restaurants and retail stores with at least 40 locations nationwide. Smaller locally owned businesses would be exempt.

The bill stands to help 22,000 low-wage District residents avoid erratic schedules so that they can better manage their monthly budgets, arrange childcare, continue education, or hold down a second job. (See Table 1.) Workers in DC’s service sector typically earn around $10 an hour, yet most are adults trying to support themselves and their families, according to a study of retail and food service industries released in June 2015 by Georgetown University, DC Fiscal Policy Institute, and DC Jobs with Justice. Nearly half said they receive their work schedules less than a week in advance.[1] For the typical worker, work hours in a given varied from as low as 25 some weeks to 38 in others, creating uneven and unpredictable incomes. Nearly all said it was important to receive more hours at their primary job. 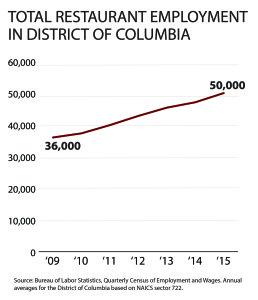 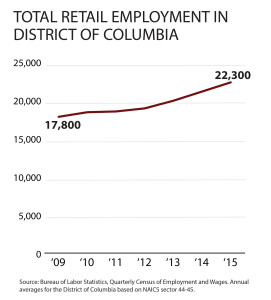 Many of DC’s Employers Already Provide These Practices

Many large retail and restaurant chains, including many with stores in DC, are beginning to understand their employees’ need for advance notice of their schedules, and are adopting the practice. The Gap, Marshalls, Target, Walmart, and Whole Foods have moved to provide their employees with advance notice of their schedules, ranging from 10 days to over two weeks, according to the BCRA Committee Report of the bill.

In addition, at the bill’s hearing in January, several small DC employers testified in favor of the bill, saying that they already adopt these practices, as it provides for lower turnover and higher employee morale — despite the fact that they are small enough that they would be exempt from this legislation.

This suggests that other large restaurant chains and retailers in the District have the capacity to provide fair scheduling for their workers, which would dramatically help their workers plan for their lives.

DCFPI hopes that the DC Council will act quickly to pass fair scheduling.

[2] DCFPI analysis of ACS 3 year data for 2011-13, person file. Data covers two different reporting periods so PUMA location is not exact, but very close. The PUMA boundaries shifted slightly during reporting. Retail and restaurant locations with 20 or more employees are used as a proxy for large employers with 40 or more locations nationwide.

[4] Bureau of Labor Statistics. Quarterly Census of Employment and Wages. Annual averages for the District of Columbia based on NAICS sectors 722 and 44-45, 2009-2015.