Raising DC’s minimum wage to $15 an hour by 2020 is a big step to help workers thrive in DC, at a time when housing costs are rising but wages have been falling for residents without a college degree. The legislation — proposed by the mayor and approved last week by the DC Council — stands to increase wages for over 100,000 people who work in DC.

But we shouldn’t stop there. Beyond higher wages, many low-wage workers in the city’s restaurants and retail stores need more hours and more predictable sch 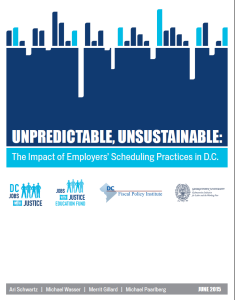 edules. A bill now before the DC Council would address this. Another bill would provide paid family leave so that workers can take time off when they have a child or a sick relative — or when they are ill themselves — without facing financial hardship or job loss. The Council should move forward on these soon.

The Hours and Scheduling Stability Act of 2015 would require employers to offer additional hours to current employees first, before they look for a new hire. In addition, the bill would ensure that employees get advance notice of their schedules, and would require employers to provide additional pay if they change an employee’s schedule with short notice.

Last summer, 4 in 5 retail and restaurant workers said it was important to them to get more hours, in a survey and report from DC Jobs with Justice, Georgetown University, and DCFPI. The survey also found that most employees want a more predictable schedule. Encouraging and enforcing stable work scheduling practices would go a long way to helping hard-working DC residents provide for their families and do things like pursue education to advance their careers.

The Universal Paid Leave Act of 2015, in its current form, would provide up to 12 weeks of paid leave for workers in DC to care for themselves, a new child, or an ill family member. The Council is currently reviewing the details and making revisions to the bill. Here are some things that are important to ensuring low-wage workers are able to take full advantage of the benefit.

The Council should act quickly to pass both of these important bills before the summer recess.