Will the DC Council believe in or break the Buffett Rule?

That is what’s at stake tomorrow when the Council votes on a bill that would allow some wealthy investors to pay the lowest income tax rate in the District, lower even than residents who earn the minimum wage. Warren Buffett, the billionaire graduate of DC’s Wilson High School, said he disagrees with public policy that makes his tax rate on investment income much lower than the rate paid by his secretary on her paycheck. If the Council passes Bill 19-747,the “Technology Sector Enhancement Act,” that’s exactly what will happen here: The legislation would lower taxes on investment income earnings in DC tech companies to just 3 percent. 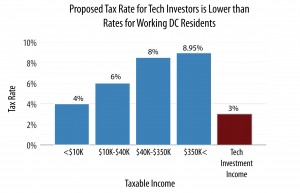 So why might DC allow the Warren Buffetts of DC to pay lower tax rates than hard-working DC residents?

Apparently, because a few asked. According to several memos from the mayor’s office, several wealthy DC residents are planning to cash out their DC tech investments soon and have threatened to leave the city if their taxes aren’t lowered.

The Gray administration says this is also necessary to incentivize the tech industry, but clearly these investors were already motivated to put their money behind these District entrepreneurs and their products. So it’s not so much an incentive, but a favor to a select group to allow them to set their own tax rate, one that is far below what most working DC residents pay and even below what investors pay in neighboring states.

The Buffett Rule isn’t exactly a scientific equation, but it’s supported by evidence from economists, policy analysts, and tax experts that cutting taxes does not encourage investment. Take this recent study from the Congressional Research Service, which looked at 65 years of data and found that reductions in tax rates, ” have had little association with saving, investment, or productivity growth.” However, it does seem to boost one statistic: income inequality. The District already ranks very high in that category.

And as we pointed out in the District’s Dime yesterday, Mayor Gray is not telling the truth when he says the tax cut would not have a cost to the city. According to DC Chief Financial Officer Natwar Gandhi, this tax cut could create “substantial” revenue losses for the District, reducing resources for the services we have all come to appreciate: Renovated high schools like Woodson and Wilson, world-class neighborhood libraries like the ones in Fairfax Village and Tenleytown, and clean streets and parks.

Diversifying our local economy is a good thing, and we agree that we should encourage the tech sector to grow and flourish. And it is. Recently DC was named the fifth best city in the country for tech start-ups. DC has also attracted millions of dollars in investments from executives at tech giants Amazon, Google, and Twitter. This is happening not because investors expect lower tax rates, but because they believe in the entrepreneurs in the District and that their investments will pay off.

Time and again, business leaders say what attracts them to a place is having a good pool of well-trained workers, good transportation infrastructure and a supportive community. DC’s great quality of life and huge number of young college-educated residents have made this a profitable place for start-up companies. Mayor Gray’s continued focus on school reform and aggressive workforce development efforts are the kinds of things the city should be doing to strengthen our business climate’not slashing taxes that make it harder to fund these important programs.

Revenue is important, so let’s at least wait for the District’s newly up and running Tax Revision Commission to examine the issue. That’s what Ward 2 Councilmember Jack Evans told the Washington Times today. We agree.

Please click bit.ly/RS69X4 to contact DC Council Chairman Phil Mendelson, your Ward Council member, and At-Large members Michael Brown, David Catania, and Vincent Orange and tell them you want them to vote NO on Bill 19-747.