The District is enjoying tremendous prosperity, yet there isn’t enough money in the proposed DC budget to support schools adequately or to make meaningful progress on ending chronic homelessness. In fact, funding for most parts of the budget will be smaller next year than this year.

How can that be?

One factor is beyond DC policymakers’ control: A lot of money will be sucked up next year by rising school enrollment, Metro’s woes, and a few other needs. But the other factor is something Mayor Bowser and the Council fully control: tax cuts. The proposed budget allows $100 million in tax cuts to go forward—triggered by a policy set three years ago—which left no room for things that matter a lot to DC residents and our economy.

With the budget now in the hands of the DC Council, they can choose to hold off on tax cuts so that badly needed investments can be made. In particular, the Council should reconsider plans to eliminate taxes on estates worth $5.5 million and to cut taxes on business benefiting from DC’s prosperity. Both the estate tax and business income tax have already been cut in recent years, by the way. 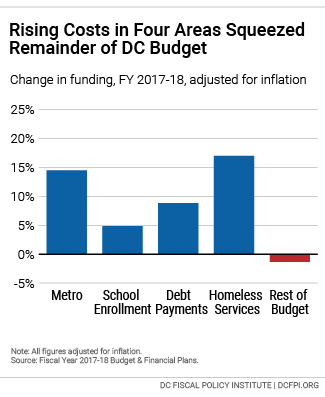 Four things in the DC budget will grow a lot next year. The rest of the budget will actually shrink, after adjusting for inflation.

It’s good news that the District is able to keep up with these demands, but unfortunate that the tax cuts left room for nothing else. Proposed school spending per student would grow less than inflation and far less than the 3.5 percent recommended by a DC government working group. The city’s strategic plan to end homelessness would get only about a third of what is needed.

These shortcomings are bad for all of us. Supporting schools and closing the achievement gap are critical to DC’s future vitality. Helping residents who face chronic homelessness is not only the right thing to do, but saves money because housing stability leads to better health and reduced use of emergency services.

It’s not too late for the District to get out of this budget squeeze. Research suggests that cutting taxes on wealthy estates and profitable businesses will not help the DC economy—certainly not the way that investing in healthy child development would. Putting the tax cuts on hold would free up $40 million and allow the Council to fund a number of services to help DC residents and strengthen our economy.