DC’s economy is very strong, with the number of jobs growing and the unemployment rate falling every year since the Great Recession. This recent good news of continuing robust growth suggests that DC’s economy can absorb policies to help and protect workers, including the minimum wage increase and proposals now before the Council to establish paid family leave and to improve scheduling practices for retail and restaurant workers. These steps are important to help workers without a college education, who have not benefited fully from DC’s growing economy and still face challenges such as low wages and high rates of part-time work. 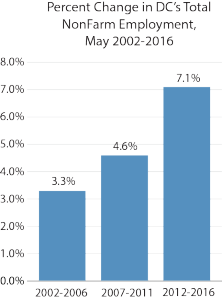 On Friday, the U.S. Bureau of Labor Statistics released its monthly employment and unemployment numbers, and found that the District saw significant improvements all around:

Moreover, DC has seen consistent job growth and unemployment declines each year since the Great Recession ended in 2010, including over 7 percent job growth between 2012 and 2016. See Figures 1 and 2.

However, just because employment opportunities are growing in the District, that doesn’t mean that these jobs provide sufficient benefits and protections in an increasingly expensive city. Wages have fallen for DC residents with a high school degree — who typically earned just $13 an hour in 2014 — and nearly one-third were underemployed, meaning they were out of work or working part-time despite wanting more hours. Moreover, the poorest fifth of DC’s households have actually seen their incomes decline since the recession ended. 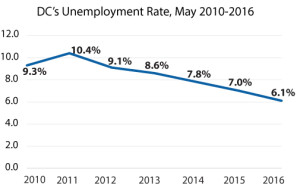 More needs to be done to ensure that all workers can afford to make ends meet. Three bills currently under consideration at the Council would be hugely beneficial to District workers:

The Council should act quickly to pass these important bills before the summer recess to ensure that once workers get a job, they have the protections they need to provide for their families.