According to recent estimates from the Institute for Taxation and Economic Policy (ITEP), District of Columbia residents can expect to receive an $850 million federal tax break this year. Nearly 60 percent of this benefit, or almost $500 million, will flow to the top 5 percent of DC taxpayers.  DC policymakers should take this opportunity to pick up where the federal government is leaving off, by recapturing some portion of lost federal revenues to adequately fund our city’s needs and make our tax code more progressive.

News coverage has focused on how the bill limits the amount of state and local taxes that can be deducted on the federal tax return (known as the State and Local Tax deduction, or SALT), meaning that people who pay more than $10,000 per year in DC property and income taxes will lose some federal tax benefits. But the same high-income taxpayers most affected by SALT are getting tax cuts from other income tax, corporate tax, and estate tax cuts in the bill. On net, the top one percent of DC taxpayers will get an average federal tax cut of over $67,000. 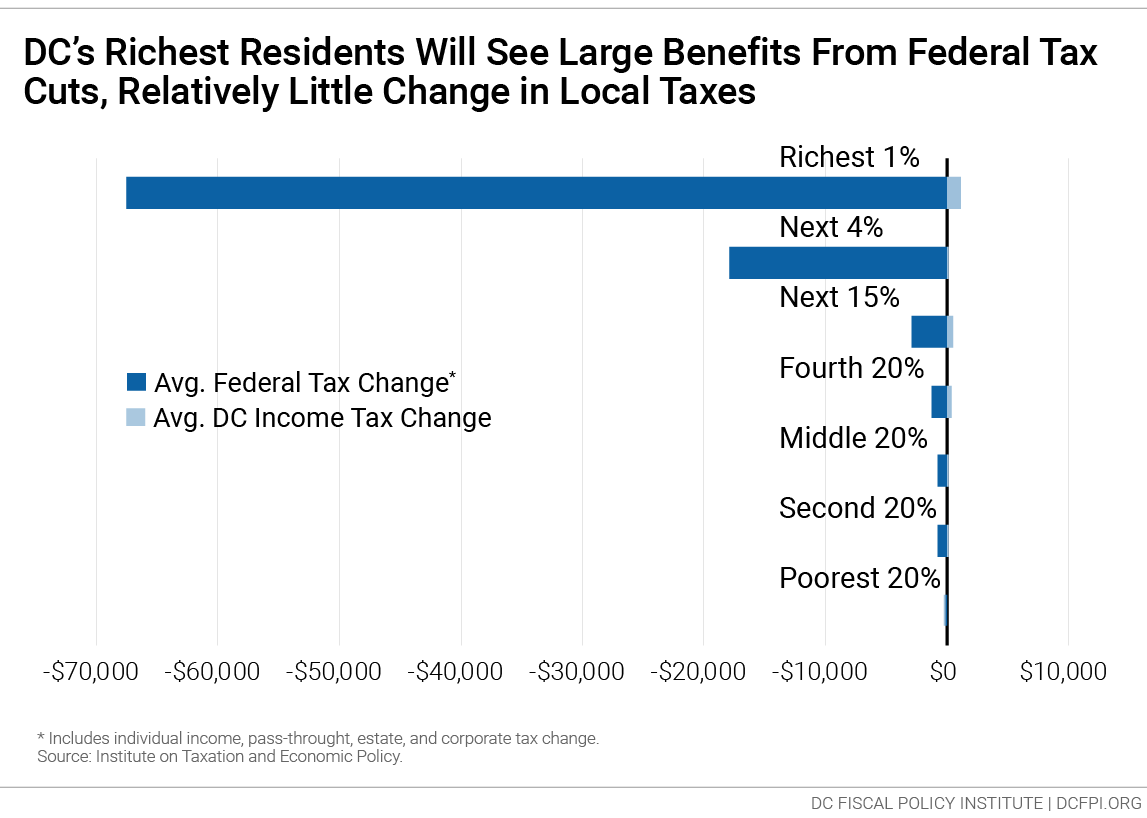 If DC doesn’t act, these large tax cuts tilted toward the wealthy will increase DC’s already severe inequality. But they also represent an opportunity.

For example, because last-minute congressional negotiations resulted in a 2.6 percentage point cut to the top federal income tax rate, DC could increase its own top income tax rates to fund progressive investments. This would still allow the richest households to pay less in total taxes this year than last.

Some states are offering creative solutions to protect higher-income taxpayers from the federal SALT changes, but because these households are getting big net federal tax cuts, these ideas should only be pursued if they enhance DC revenues and allow the District to better serve low-income residents.

ITEP estimates that federal tax changes will increase DC personal income taxes by approximately $80 million this year. This does not include effects on DC’s corporate tax, which are uncertain.

The DC tax revenue increases come from connections between DC tax law and the federal rules: the federal bill eliminated the “personal exemption,” a deduction that taxpayers take for each member of their household. This change increases DC taxes for most households, while other provisions decrease DC taxes. According to ITEP, all together, about 40 percent of DC taxpayers will pay slightly more to DC in personal income taxes, and 60 percent will pay the same or less.

…But Action Is Needed to Make Our Code More Progressive

Any of these options are much more targeted to families who need relief. These items could also be funded with revenue from increasing top tax rates or other progressive measures.

Congress has moved to dramatically cut taxes for the wealthy, which will increase inequality. DC should fight back with smart tax policy and bold investments.