Legislation adopted last fall to turn city-owned land into mixed-income housing is already at work! Thanks to the new law, nearly one-third of the homes in a proposed development at 965 Florida Avenue, NW will be affordable to residents struggling with DC’s incredibly high housing costs.

The DC Council will vote next Tuesday on the disposition of land needed to move this project forward. Given the many benefits of this development, we hope the Council will support it. 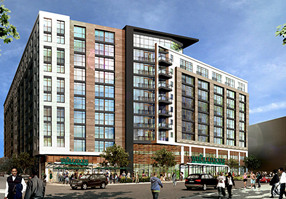 Thirty percent of the apartments — 106 of 352 — will be affordable, following requirements of the Disposition of District Land for Affordable Housing Act adopted last fall. Twenty-six apartments will be for residents with incomes below $29,000 for a family of three (30 percent of the Area Median Income) and 79 will be for residents with incomes under $49,000 (50 percent of Area Median Income). The project will help singles and small families, as one-third of the apartments will have two bedrooms and the rest will be studios or one-bedroom units.

The 965 Florida Avenue project highlights the many benefits of the new law. The families that move in there will have high-quality housing that is permanently affordable, Metro accessible and close to job opportunities and neighborhood amenities. Without housing help, many low-income families now spend more than half their income on DC’s high and rising rents.

With low-cost private housing virtually non-existent in the District, and many neighborhoods like U Street rapidly developing, the District needs to pursue affordable housing in a variety of ways. As the 965 Florida Avenue project shows, the new law to build mixed-income housing on city-owned land is a key way we can meet this important goal.