The latest Census data from the 2016 American Community Survey (ACS) show that the District’s overall economic growth remains steady, yet this growth has not reduced the number of DC residents struggling to make ends meet, or the economic barriers faced by people of color.

The District’s median income has remained steady and remains on an upward trajectory. Median household income in 2016 was 20 percent higher than in 2007, and 12 percent higher than in 2010, after adjusting for inflation. The change in median household income between 2015 and 2016 was not statistically significant (meaning the estimated change is indistinguishable from zero)—but this is not surprising because it is uncommon for one-year changes to be significantly different. Other key metrics such as personal income (up 3 percent) and resident employment (up 2 percent) suggest that the city’s overall economic growth from 2015 to 2016 was strong.

Despite substantial long-term economic growth, the number of District residents in poverty has been stuck over the past decade. In 2016, 120,000 DC residents, or 19 percent of the population, lacked basic economic security. These figures are statistically unchanged from before the recession in 2007, and from 2015. The poverty line for 2016 is $19,000 for a three-person household. 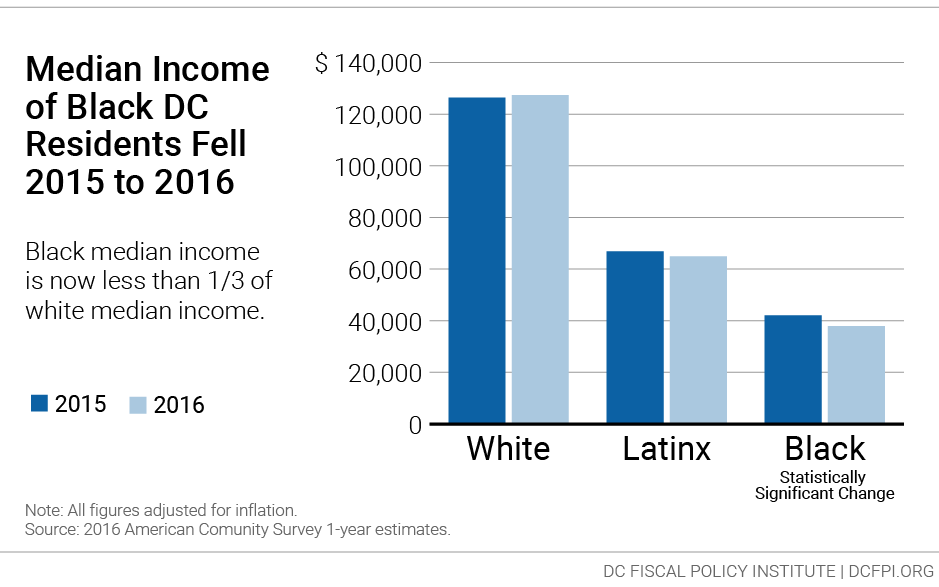 Moreover, the data suggest that longstanding racial disparities widened between 2015 and 2016, and that people of color are doing economically worse not only than their white counterparts, but also compared to the year before. Black median household income fell from $42,000 in 2015 to $38,000 in 2016, a rare statistically significant year-over-year change. The Black median household income is now less than a third of the white median income. At 28 percent, the poverty rate among Black residents remains higher than before the recession, and 9 percentage points higher than DC’s overall poverty rate. The data also show a statistically significant increase in the poverty rate among Latinx DC residents, from 12 percent in 2015 to 18 percent in 2016. It will be important to see if this trend continues next year.

“In the face of a strong economy, these widening disparities show how far DC has to go toward breaking down the barriers to economic opportunity faced by people of color,” said Claire Zippel of the DC Fiscal Policy Institute.

The health insurance data from the ACS show that just 3.9 percent of DC residents lacked health insurance in 2016, which is well below the national average of 8.6 percent and the fourth lowest uninsured rate among the states. This low uninsured rate reflects DC’s Medicaid expansion and the creation of the state-based marketplace in recent years, which were critical components of the Affordable Care Act (ACA) that have helped provide more health coverage options to DC residents of all incomes and have reduced barriers to care.

Yet little change from 2015 to 2016 shows that the District may be plateauing in its coverage gains for residents—and in one instance, worsening for children under 18, whose uninsured rate showed a statistically significant increase from 1.5 percent to 3.1 percent.

“Moving forward, the District will need to become more aggressive in reaching its remaining 26,000 uninsured residents and informing them of their coverage options,” said Jodi Kwarciany of the DC Fiscal Policy Institute.