Last week’s announcement of growing city revenues, combined with recent Council action to speed up the implementation of tax cuts recommended by the Tax Revision Commission, makes it likely that the District will soon cut income tax rates for middle- and upper-income residents and also reduce income taxes for businesses.

The budget passed last week by the DC Council devotes every dollar of revenue growth through this fall to tax cuts, and the new revenue forecast from the Chief Financial Officer showed that revenues for 2016 and beyond will be $38 million more than expected. If that is maintained in the next revenue forecast in September, $38 million of tax cuts will be implemented in 2016.

Earlier this week, the District’s Dime commented on how the aggressive implementation of tax cuts could limit DC’s ability to cover with rising costs of services. Using every dollar for tax cuts means we have less revenue to make investments in affordable housing, schools, or homeless services and we have less cushion to deal with unexpected occurrences like lawsuits or weather emergencies.

Today, we want to highlight the precise tax cuts that would go into effect. (See Table for full list of “tax triggers.”) If the revenue forecast does not change dramatically in September, DC will make the following tax changes, effective January 1, 2016. 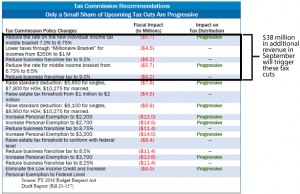 If the September revenue forecast shows a further increase in revenues, additional tax cuts would be triggered. The next items on the list including increasing the standard deduction in the income tax, which largely benefits low- and moderate-income renters, and eliminating estate taxes for estates worth $1 million to $2 million.

When the September forecast arrives, we hope that DC Council will reexamine the pace of implementation of the tax revision package — weighing our ongoing needs with the expense of tax cuts.