The Department of Employment Services (DOES) is a major source of job search, training, and placement programs for unemployed or underemployed adult District residents, as well as for DC youth.[1] The approved fiscal year (FY) 2018 budget allocates $76.5 million in local and federal funds for workforce development within DOES. This is slightly lower than the FY 2017 budget, after adjusting for inflation (Figure 1 and Table 1). 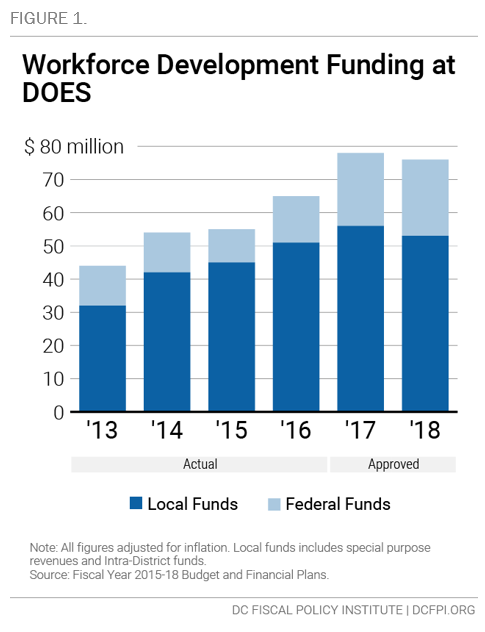 Subsidized Jobs Programs Will Grow Under the FY 2018 Budget

Underspending of Federal Money at DOES Continues to Be an Issue

Unfortunately, DOES has spent less than its available funding in recent years, raising concerns about its ability to meet the needs of unemployed and underemployed residents. In 2016, the department spent $65 million on employment services, compared with $78 million in available funding (Figure 3).

DOES has recently made efforts to spend down more of its federal money on youth programs.[4] However, across all workforce programs at DOES, a total of $17 million in federal money from prior fiscal years has been left unspent, including $6.2 million for youth, $4 million for dislocated workers, and over $2 million in employment services.[5] 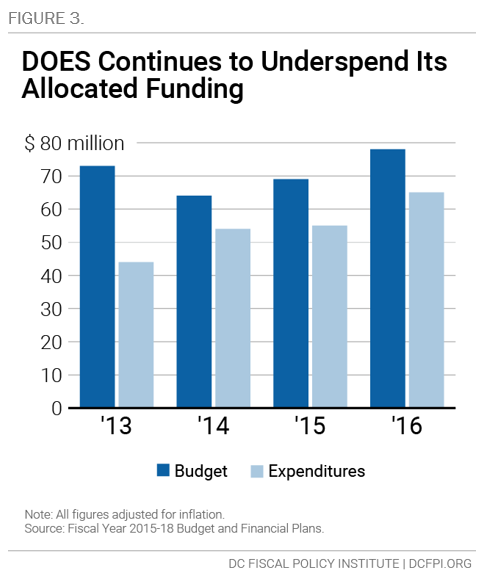 The approved FY 2018 budget includes funds to create a new Washington DC Infrastructure Academy, located at the St. Elizabeth’s East Campus, which will provide job training in the infrastructure industry, including the utility, energy efficiency, transportation, and logistics sectors. The academy will establish a partnership between key partners in the infrastructure sector—businesses, trade unions, and the University of the District of Columbia—who would work together to provide work-based learning to underserved District residents to create a pipeline to employment.

The budget allocates $16.75 million in capital money to construct the facility by 2021.

In December 2016, the DC Council passed the Universal Paid Leave Act (UPLA), which will provide eight weeks of paid leave for new parents to be with their children, six weeks to workers who need to care for an ill relative, and two weeks for workers to address their own health needs, beginning in 2020.

The estimated start-up administrative costs for the program are $40 million over 36 months. The FY 2017 budget had allocated $20 million toward these costs, and the approved FY 2018 budget will fund the additional $20 million needed to help the new office secure an IT program, office supplies, and other start-up costs.

This means that beginning on October 1, DC can move forward on implementation, so that workers receive their benefits by 2020 as mandated by the statute. UPLA stands to help not just DC workers, but also small businesses that currently cannot afford to provide paid family leave. An extensive analysis of this program found that it would provide additional benefits to DC residents and the economy, including increasing breastfeeding rates, reducing infant mortality, and increasing the number of women who participate in the labor market.[7]

The approved FY 2018 budget includes $2 million to provide transportation assistance to adults in education and training programs. This is an important investment, because the cost of transportation has been identified as a major barrier to participation.[8]

Without transportation assistance, many adults miss classes and are unable to complete their programs. This means that the District has not been getting as much as it could out of its substantial investment of over $80 million in local and federal dollars to support educational instruction for adult learners.[9]

Budget Funds Some New Labor Laws, but Not All

Three labor laws were passed in 2016 that can go a long way to helping vulnerable workers. Each was passed subject to appropriation, which means they could not be implemented until funds were provided to meet their costs.

However, the budget leaves one new labor law unfunded:

This bill should be funded as soon as possible, so that workers can begin to benefit from it. 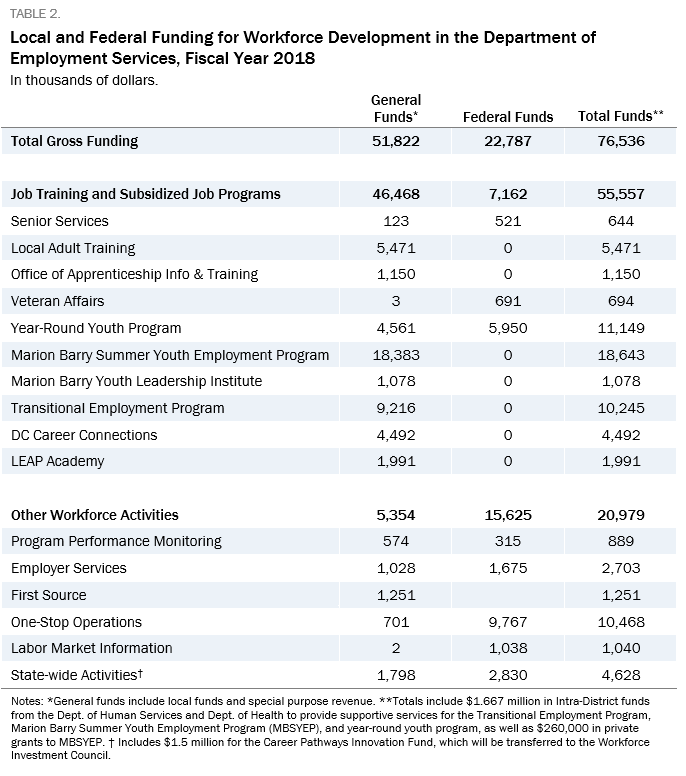 [4] March 30, 2016. “Grosso exchange of letters with DOES about WIC’s oversight of youth programs.” http://www.davidgrosso.org/grosso-analysis/2016/3/30/grosso-exchange-of-letters-with-does-about-wics-oversight-of-youth-programs

[8] According to learner listening sessions conducted in 2015 by the DC Adult and Family Literacy Coalition (AFLC) and Fair Budget Coalition. In addition, over a third of 1,000 adult learners surveyed in 2016 by the DC AFLC reported their biggest transportation concern is its cost.

[9] Deputy Mayor for Education. 2016. “The Need for Transportation Subsidies and Assistance for Adult Learners.” http://lims.dccouncil.us/Download/36809/RC21-0140-Introduction.pdf