The recovery from the Great Recession disproportionately benefitted the wealthiest 1 percent of District residents, while the city’s poorest residents were left behind. Nearly two thirds of recent income growth in DC has been captured by the top 1 percent, who now take home $1 of every $5 earned in the District. At the same time, the average income of the poorest DC families has fallen in recent years. To ensure future growth is shared more equally, DC should enact policy initiatives such as increased affordable housing investments, paid family leave, and fair scheduling for workers.

A new paper from the Economic Policy Institute analyzes the most recent IRS data to examine how the 1 percent and 99 percent have fared from 1917 to 2013. Here are the key findi 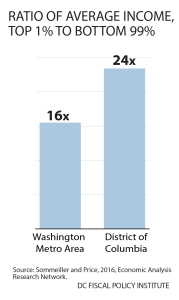 ngs for the District:

This research is in line with DCFPI’s research from earlier this year, which found that the poorest fifth of DC’s households have seen their incomes decline since the Great Recession, while DC’s high-income households are among the wealthiest in the nation.

The District should take steps to help boost the incomes and employment prospects of families that struggle the hardest to make ends meet, including passing legislation on paid family leave and fair scheduling, as well as increasing existing efforts to make more housing affordable.