Federal contracting contributes to DC’s wide income inequality, but changes can be made by the federal government to boost the wages for these workers, both in the District and throughout the nation, a new report finds.

While the District is one of the most economically successful cities in the nation, it is also one of the most economically unequal places to live and work in America. Federal contracting work exacerbates this problem, according to “How the U.S. Government Is Making Washington, DC the Capitol of Inequality,” coauthored by DCFPI and Good Jobs Nation. 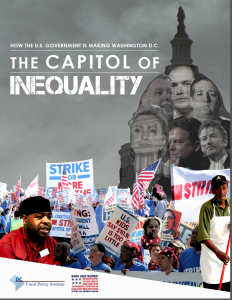 The report finds that:

A look at the Senate Dining Room’s workforce illustrates how federal contracting exacerbates the city’s economic divide. The restaurant’s workers were once directly employed by the federal government, and earned living wages as well as health care and retirement benefits. Then in 2008, the government outsourced its food service operations to a private corporation, which promptly slashed pay and benefits for new hires. Jobs that once paid living wages with full benefits now pay just over $10 per hour with no benefits.

In order for contract workers to adequately provide for their families, their wages and benefits must increase. Yet currently, federal contracting firms have the opposite incentive’to depress wages in an effort to lower their prices when bidding for contracts.

To that end, the President can issue an Executive Order granting contracting preference to companies that pay at least the living wage for the local region. Establishing this preference would remove the motivation for companies to pay the lowest wages, and instead offer an incentive to increase the wages of their lowest paid workers, who need it the most.

The President himself has declared that “nobody who works full-time should ever have to raise a family in poverty.” The issuance of an Executive Order to boost contract workers’ wages would go a long way to ensuring just that, and would help to re-establish the federal government as a model employer, rather than one that exacerbates income inequality.

Such an action would not only improve the standard of living for some 24,500 workers in the District of Columbia, but will also help thousands more federal contract workers throughout the nation.