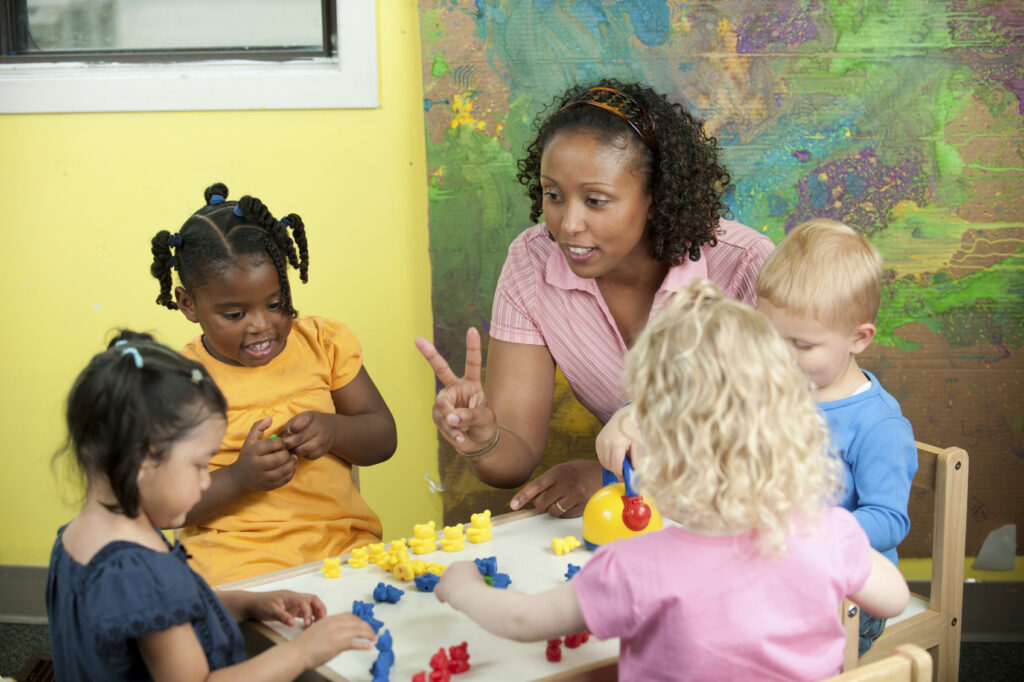 Under the current version of the DC budget proposal for FY 2022-2025, early educators participating in the District’s child care subsidy program would not see compensation increases until fiscal year (FY) 2023. In early July, the Committee of the Whole (COW), the DC Council committee that oversees the budget for early learning programs, approved changes to the Mayor’s FY 2022 budget proposal. While an improvement from the Mayor’s plan, it fails to fully address early educators’ inadequate pay. In particular, the COW’s proposal delays already-delayed funding for early educator pay, makes a one-time investment instead of recurring investments in this critical provision of the Birth-to-Three law, and commits only a fraction of the funds needed.

Increasing compensation for early educators increases pay equity, improves the quality of and access to early learning, and helps create an economy that works better for everyone. A more resilient child care sector and fairly paid workforce requires a longer-term plan funded with recurring, local revenue—a commitment that the DC Council made in 2018 when they approved the Birth-to-Three Law. DC’s budget should make use of the current federal relief funds to address the difficulties created by the pandemic and to get the ball rolling on compensation increases. And the Council can raise additional revenues to maintain this important investment by asking wealthy DC residents to pay their fair share of income taxes.

Now is the time for a bold strategy that ensures DC’s child care sector, workers, and families recover.

Higher pay attracts a more skilled workforce, reduces turnover, and connects to better child outcomes, research shows. DC educators cannot wait another year for fair wages. In the District, one in three early educators live in poverty due to inadequate pay, and many are leaving the industry in search of higher wages. DC’s early educators—who are primarily Black and brown women—earn a median annual income of approximately $31,950, which is barely above the minimum wage. These unfair wage conditions are contributing to a dwindling supply of early educators: The early education workforce has declined by 15 percent nationally since before COVID-19 began, according to the Bureau of Labor Statistics.

Despite the critical need for and decline in early childhood educators, the latest version of the Council’s DC budget proposal offers no long-term plan for investing in these workers. The COW’s $18.5 million plan for higher compensation, which uses the Mayor’s proposed dollars for the Quality Pay pilot to increase child care workers’ pay by 20 percent in FY 2023, fails to fund compensation in fiscal years 2022, 2024, and 2025. While an improvement over the Mayor’s budget, which proposed an inadequate program to provide bonuses for programs that pay infant-toddler educators’ wages commensurate with education credentials, the Committee’s proposal funds less than one-third of what the Under Three DC Coalition is calling for each year of the four-year financial plan. Relying on one-time federal funds will not allow for the necessary transition to sustained, higher pay.

The Committee report notes that investments should emphasize stabilizing the child care sector as it recovers from the pandemic—a pressing need but not the only one. It also calls for the Office of the State Superintendent (OSSE) to complete its years-delayed cost of care analysis—a study to determine the pay early childhood educators need to cover rent, licensing, and other costs adequately—by August 2021 and work collaboratively with childcare advocates and the Council to identify a mechanism that ensures providers use the funds to raise wages before funding the subsidy program.

In passing the Birth to Three Law in 2018, the Chairman, as one of the bill sponsor’s, and the Council made a promise to improve the quality of early education by beginning to pay programs participating in the District’s child care subsidy program according to the actual cost of providing care and offering early educators with similar credentials and experience compensation that is on par with public school teachers. They should now follow through on that promise.

A recurring investment beginning in fiscal year 2022 would help the District deliver on the promise of adequate compensation for early educators in the child care sector. To maintain their commitment to this important investment, the Council can tap three major revenue sources: federal funds from the American Rescue Plan, revenue raised from increasing the personal income tax on DC’s wealthiest households, and sports wagering funds already earmarked for early education but unallocated for FY 2024 and 2025.

And to ensure early educators’ paychecks benefit directly from these investments, the Council can leverage one of two pay mechanisms: They can use contracts modeled after DC’s Pre-K Enhancement and Expansion program, in which any child care provider participating in the program agrees to follow wage guidelines based on the Washington Teacher’s Union pay schedule. The Council can also set and fund higher compensation directly through the District’s child care subsidy program, but that wouldn’t reach providers not participating in the subsidy program. Regardless of approach, lawmakers should finalize this mechanism as soon as possible to ensure early educators are paid fairly and as quickly as possible.

If compensation is delayed beyond the start of the 2022 fiscal year as the program design is finalized, the Council should allocate funds for a one-time wage supplement for early educators before higher compensation kicks in, which will likely happen in spring or summer of 2022. The $18.5 million from the Mayor’s proposed Pay Pilot can fund this critical need.