Testimony of Wes Rivers, Policy Analyst At the Hearing on Bill 21-353 “the Local Jobs and Tax Incentive Act of 2015” District of Columbia Committee on Finance and Revenue October 14, 2015
Skip to content
All Publications & Resources > Testimonies >
Share :
Share this...

Chairman Evans and other members of the committee, thank you for the opportunity to testify today. My name is Wes Rivers, and I am a Policy Analyst with the DC Fiscal Policy Institute. DCFPI engages in research and public education on the fiscal and economic health of the District of Columbia, with a particular emphasis on policies that affect low- and moderate-income residents. 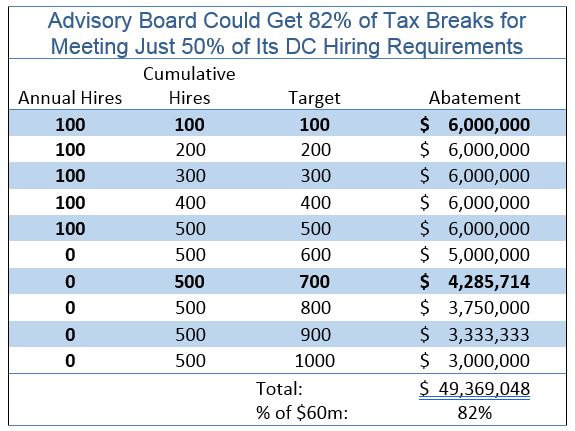 Despite these significant efforts by the Bowser Administration to ensure that a subsidy to the Advisory Board results in net benefits for the District, we believe that these tax subsidies are not needed to keep the Advisory Board in the District and would be a bad precedent for the city to take.  DCFPI thus recommends that the tax incentives be rejected.

Research shows that the greatest factors affecting a company’s location include factors such as a skilled workforce and an area’s quality of life, and that taxes largely are not important factors into that decision-making.[1] These points were echoed in the Chief Financial Officer’s Tax Abatement Financial Analysis:

Beyond that, there are signs that that Advisory Board would like to stay in the District. The legislation requires the Advisory Board to sign a lease by December 31, 2015, which means it is likely that lease negotiations have been underway for some time.  In addition, even with this tax break, the building lease costs of staying in DC will be greater than in some suburbs, a sign that the Advisory Board sees advantages to being in the city.

There is no doubt that without the abatement, the District risks losing the Advisory Board to another jurisdiction – which has symbolic implications as well as financial losses with respect property tax and corporate franchise tax revenue. However, the District faces that risk every day.  Despite the higher cost of office space in the city, the District consistently has lower office vacancy rates than the suburbs. This suggests that the District does not need to offer tax abatements to keep companies in the city, and that offering a substantial tax subsidy to the Advisory Board only risks setting expectations that any company can get incentives when making location decisions.

That being said, if the District is going to consider giving a tax break, DCFPI believes the structure of the deal provides some important protections for taxpayers and real community benefits. For example, the 15-year lease ensures that Advisory Board will stay in the District beyond the abatement period. With lessons learned through the Living Social Deal, it is also good that the District is requiring that all resident hires will be “net new,” guaranteeing new employment and a larger tax base for DC. If Advisory Board hires one District resident but fires another, they cannot count the new hire towards their hiring requirement.

However, if the DC Council agrees with the mayor that the risk of the Advisory Board leaving the city is great, the Council should at least make changes to ensure DC gets the best deal possible. If the Advisory Board does not meet hiring goals in a given year, the city will prorate the abatement in a way that could give Advisory Board more than their fair share.

Thank you for the opportunity to testify, I am happy to answer any questions.