Chairperson Mendelson, Grosso, and members of the committee, thank you for the opportunity to provide testimony. My name is Alyssa Noth, and I am a policy analyst at the DC Fiscal Policy Institute. DCFPI promotes budget choices to address DC’s racial and economic inequities through independent research and policy recommendations.

DCFPI supports the Expanding Access to Great Schools Act of 2020, which would create a new voluntary preference for at-risk students applying to public charter schools in the DC Common Lottery, My School DC. The proposed legislation could improve the chances that students considered “at-risk” match at a school they rank highly in the common lottery, according to new research from the DC Policy Center.[1]

Students considered “at-risk of academic failure”[2] are not getting into highly sought-after public charter schools on an equitable basis, based on waitlist data. Consider the ten public charter campuses with the largest waitlists for the upcoming school year. Almost half of DC’s public charter school students are considered at-risk, and yet each of these campuses has a student population with a significantly smaller share of students with that designation than the citywide average. The proposed legislation before you would most meaningfully expand access for at-risk students at this subset of schools, the DC Policy Center analysis shows. As a city, we should be alarmed by the status quo enrollment data and follow the lead of a majority of states with public charter schools to implement an equity preference to make our schools more socioeconomically diverse. 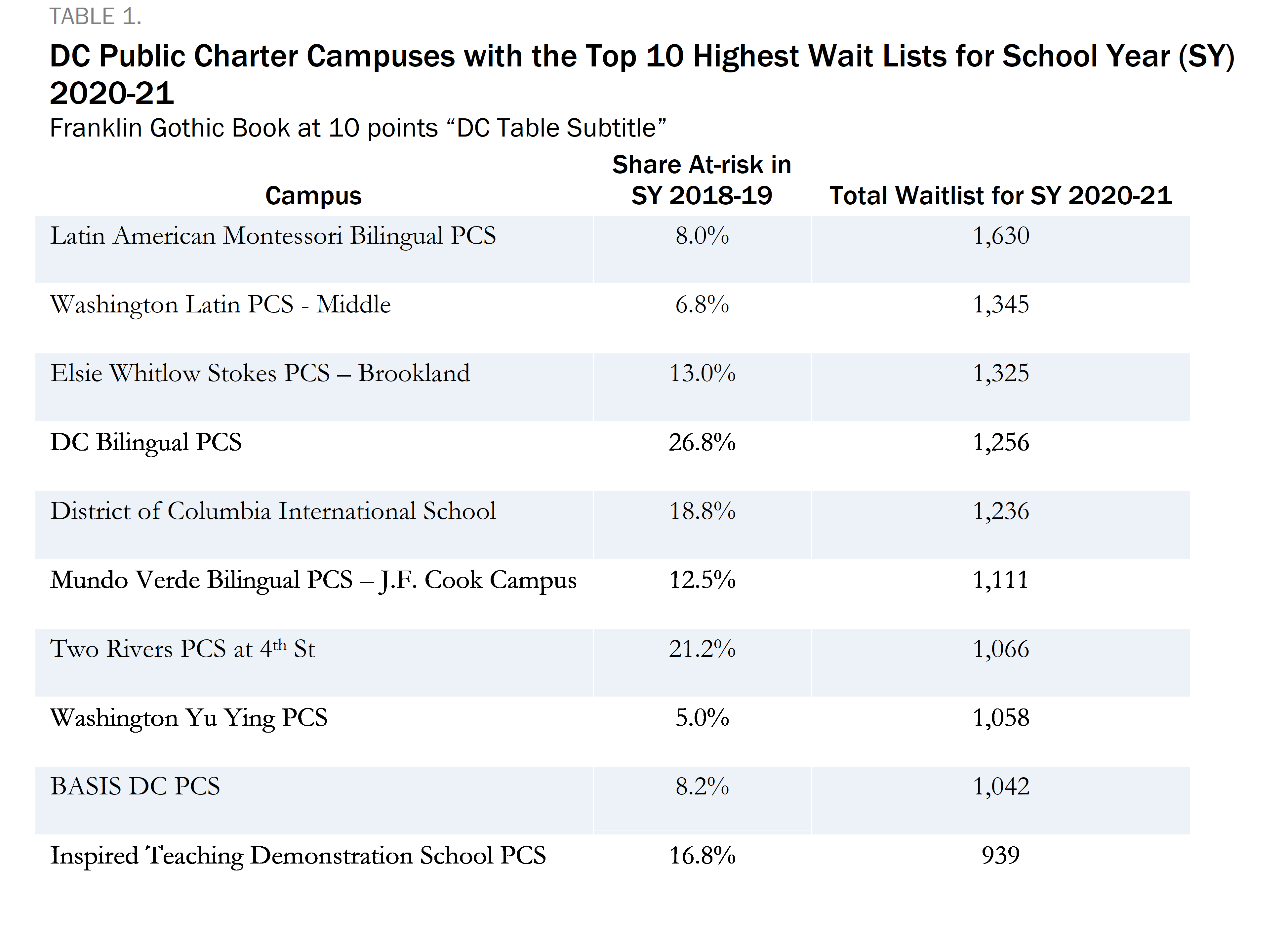 At-risk students are the least likely to attend the best-rated schools for two key reasons. First, many schools with a small share of at-risk students in DC are located far from neighborhoods with the greatest numbers of at-risk students, and at-risk students are less likely to live in-boundary for a four- or five-star school due to decades of racism and historical segregation. In fact, only two DCPS neighborhood schools East of the River, Kimball Elementary and Burrville Elementary School, have a STAR rating of four or above on the federally mandated DC state report card.[3] Second, sibling preference at many schools in the common lottery means that schools are likely to maintain existing demographics as schools under the status quo.

As a result of these key drivers, only 25 percent of at-risk students attend a highly rated school, compared to 58 percent of non-at-risk students. There are limited seats available and at-risk students are in competition with students who are not at- risk for high-quality seats, resulting in inequitable outcomes. For example, when applying for a seat at a charter school, unless they have a sibling already attending the school, an at-risk student experiencing homelessness has the same statistical chance of getting in as a wealthy student.

Of course, all students should have access to high-quality schools and, ideally, there would be no need for a lottery at all. As we work towards this goal, DC Council should take this small step towards a more equitable public school system in DC. Over time, and in conjunction with the already-implemented sibling preference, having a priority for at-risk applicants could shift demographics for the entire school.

[2] The primary education metric for economic disadvantage is the category of “at-risk for academic failure” – or families receiving SNAP or TANF, children experiencing homelessness or in the foster care system, and/or students in high school who are overage/under- credited.