Tax cut “triggers” adopted last year are causing the city’s revenues to grow slower than any time in the last two decades, other than during recessions. This is affecting the ability to meet the demands of a growing city, such as rising school enrollment and increasing homelessness. As the Council prepares to vote on the DC budget, they should modify the triggers to balance tax cuts with the need for adequate revenues to meet important needs. 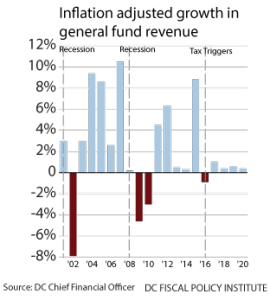 Under the tax cut triggers, 100 percent of any increase in revenues from a growing economy, above revenue projections from the previous year, is devoted to a set of tax cuts recommended by the Tax Revision Commission.

The triggers are greatly restricting the District’s revenues. Revenues will grow no more than 1 percent per year every year from 2016 through 2020, adjusting for inflation. Even in the Great Recession, DC’s revenue growth did not stay this low for so long. 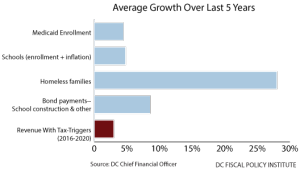 DC’s revenues are projected to increase by just 3 percent per year for the foreseeable future (not adjusting for inflation), largely due to the tax triggers.[i]  Yet many needs that affect the city’s budget are growing faster than that:

The $47 million in tax cuts triggered over the past year lead to a fiscal year 2017 budget with modest growth and many gaps. For example, the proposed homeless services budget will not be sufficient to end chronic homelessness in FY 2017, a goal embraced last year. In addition, the proposed budget does not provide any funding to support permanent reforms to the TANF time limit to protect 6,200 vulnerable families who face the loss of all income and employment assistance.

The tax cut triggers will likely contribute to funding gaps in key services for years. With limited revenue growth, it will be hard to tackle challenges such as these.

Moving forward, the tax triggers can be reformed in two ways:

The DC Council votes on the Budget Support Act next week. In that legislation, they should include an amendment to reform the tax triggers as listed above. This would go a long way in helping the city to fund critical services at a time of growing needs, while keeping the overall tax cut package intact. 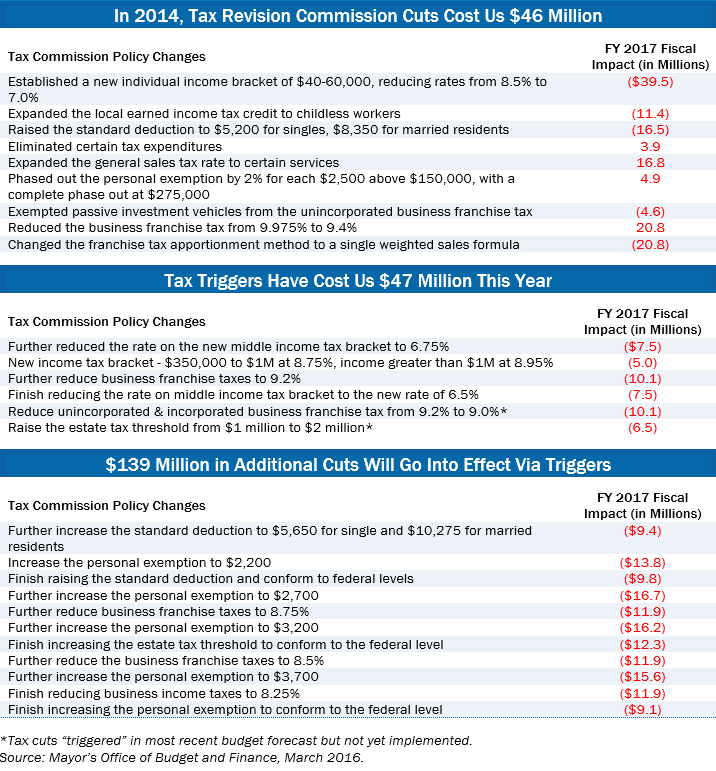