At least 41 homeless residents died in the District over the past year, most of them prematurely.  This tragedy highlights the need to make further progress on the city’s plan to end chronic homelessness and to take other steps to protect residents when they are homeless.

Being homeless often leads to a life that is cut short. People who don’t know where they’re going to spend the night struggle to receive needed sevices like medical treatment or counseling. And often they are forced to stay in places that make their illnesses worse or do not keep them safe from violence. As a result, the life expectancy of people facing chronic homelessness is far shorter than for those of us who are stably housed.

The People for Fairness Coalition — a local organization headed by individuals who have experienced housing instability — led events last week to mark the Homeless Persons’ Memorial Day. Community organizations, government officials, faith groups, and residents came together to remember those who died in the past year and to commit to ending homelessness in the District so no one dies homeless again. Among the remembered were:

Sheikh Zayed Sultan Aal-Nahyan, “Zeke,” who died from complications related to his diabetes, which he struggled to manage while homeless.

Mark “Bear” Parker, who died of heart disease and was found in McPherson Square where he had lived for years.

Joel Johnson, who was murdered outdoors in the place where he frequently slept.

John Doe, a homeless man who died but no one knows his name. 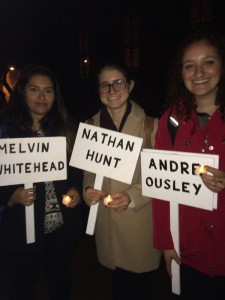 Participants called on the mayor and DC Council to ensure that no one else dies homeless again. They urged them to fund the second year of the city’s plan to put the District on track to end long-term homelessness by 2020. They also called for a temporary moratorium on removal of encampments, asking that the policy be reviewed to ensure that individuals are not put at greater risk for cold weather injury. The DC Fiscal Policy Institute supports these efforts.

Kate Coventry is a DCFPI Policy Analyst and voting member of the Interagency Council on Homelessness.