Tomorrow, the DC Council will have the opportunity to address the District’s affordable housing and displacement crisis by voting on vital improvements to the Comprehensive Plan (“Comp Plan”), which has not been updated in eight years. As the primary document that guides what and where development occurs in the District for the next few decades, changes to the Comp Plan have the power to shape inclusive communities and undergird all other decisions related to land use and housing. The DC Council will vote on the draft Comprehensive Plan, which includes critical revisions that prioritize the creation of affordable housing and the prevention of displacement. An “aye” vote would be a major step in the right direction.

However, two of the most important new provisions in the Comp Plan – those addressing the preservation of similarly-sized affordable housing units and the ‘right-to-return’ for existing residents of a redevelopment site – are most at risk of being stripped from the final version. We urge the Council to preserve the protections and vision included in the draft plan.

There is a great deal at stake: The Comp Plan can either uphold and exacerbate existing inequities throughout the District, or lawmakers can design it to stem the tide of economic and residential segregation. After more overt forms of segregation such as racially restrictive deed covenants were barred by the late 1900s, exclusionary zoning continued to subtly restrict low-income, predominantly Black households from high-opportunity neighborhoods. For example, requiring minimum lot sizes and specific housing types increase the costs of construction and relegate lower-income residents to neighborhoods with fewer employment opportunities and lower-quality schools. Because the financing for construction of affordable housing often requires a higher number of units in a multi-family configuration, changing Comp Plan zoning districts from lower to slightly higher density can help create affordable housing opportunities in expensive, high-opportunity neighborhoods that are traditionally restricted to two-story construction.

The current Comp Plan is vague and contradictory since it was written with many different interests in mind and some of these interests have conflicted with one another. Further, it does not prioritize important community goals, such as adequate affordable housing, anti-displacement rules, or reducing income segregation above other qualities or amenities. The Council’s draft plan addresses these shortcomings and paves the way for building a more inclusive city by including language that Councilmember Nadeau put forward to the Council during the first vote in July.

More specifically, Councilmember Nadeau proposed that the following benefits should be considered high-priority when the Zoning Commission assesses development applications from developers:

The DC Housing Authority’s (DCHA) plan to ‘reposition’ almost a third of its portfolio over the next two years is a pressing example of why improvements to the Comp Plan are so important, especially the improvements around one-for-one replacement of units at the same size and affordability level and residents’ right-to-return. DCHA owns and operates DC’s public housing stock with funding from the federal government. ‘Repositioning’ entails converting the operating subsidy from Section 9 (public housing) to Section 8 (partially-private) funding. This allows DCHA to access private capital for critical repairs and redevelopment, but tenants may lose access to their deeply affordable units as well as other protections that are often lost during redevelopment. As such, requiring the preservation of housing units at the same affordability level and similar household size — one of Councilmember Nadeau’s proposed provisions in the draft Comp Plan — is of paramount importance as DCHA continues the repositioning process.

If DCHA implements their plan, the District could lose 355 units of affordable housing, according to an analysis of DCHA data.[1] Of these 355 units, larger-sized units such as 5+ bedroom units and 3-bedroom units, will decrease at the highest rates. This is deeply concerning given that there are over 11,500 large renter households with incomes less than 50 percent AMI, most of whom are either under-housed or housing cost-burdened, research shows. Over 2,500 families with children rely on public housing, accounting for 35 percent of households in DC’s public housing; therefore, many public housing apartments are specifically designed to have three or more bedrooms. On the private market, however, larger affordable apartments are rare; only 11 percent of all apartments in the District have three or more bedrooms, and only one percent of apartments are low-cost three-bedroom units (most of which are likely public housing units). If the draft Comp Plan language had already been in place during past redevelopments, it is likely that the District would have more low-cost three-bedroom units available on the market. 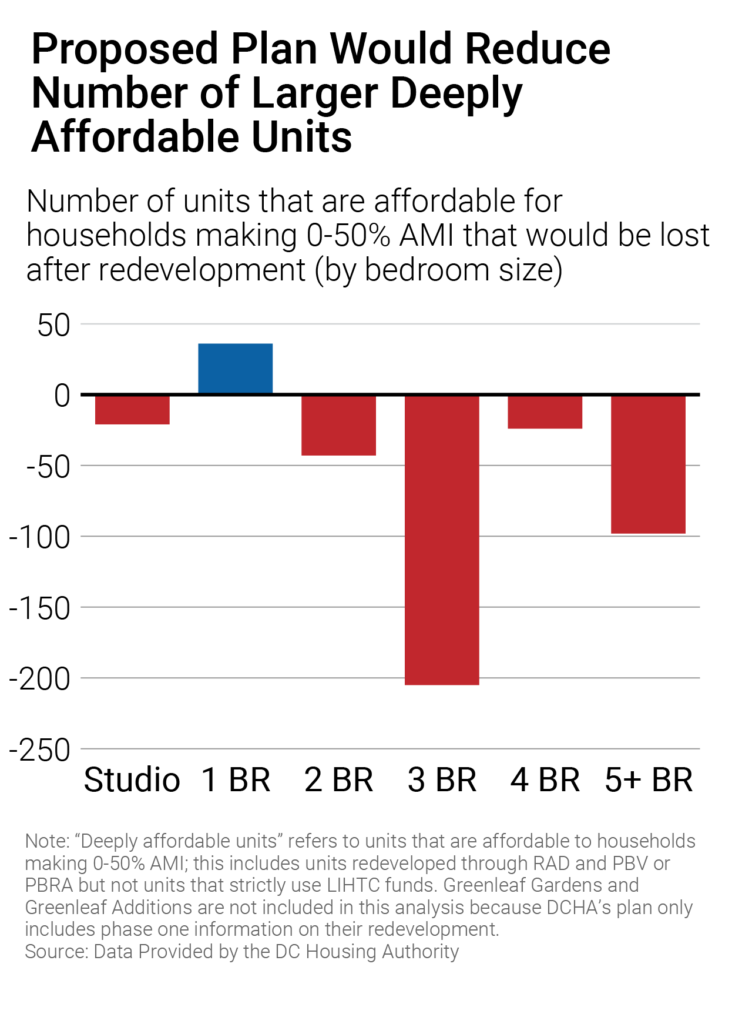 DCHA’s repositioning plan also presents a serious risk that households who are relocated during redevelopment would not all be able to return due to additional screening requirements or the lack of available units. We support the DC Council for explicitly naming residents’ right to return since residents who are most impacted by redevelopment should be guaranteed to benefit from the new, high-quality homes. Past efforts by the DC government to adhere to a “right to return” policy have not always been successful. For example, the New Communities Initiative plan to redevelop 50 acres of land collectively known as ‘Northwest One’ has suffered a net loss of affordable housing in the last decade, making it impossible for all displaced residents to return. Since DCHA will at least partially transfer ownership of their properties to private owners and managers, it is important for the DC Council to codify residents’ “right to return” in the Comp Plan rather than leaving it to the discretion of the private owners and managers.

A slew of recent findings by the Urban Institute, the Joint Center for Housing Studies, and the National Community Reinvestment Coalition crystallizes the need for more affordable housing units and protections against displacement. However, DCHA and the DC Building Industry Association have recently attempted to intervene in the Comp Plan process to eliminate family-size unit requirements and right-to-return, as well as weaken language around the preservation of affordability. Such attempts to weaken residents’ protections during redevelopment further clarify the very need for these same protections.

In the midst of skyrocketing rents on the private market and thousands of affordable housing covenants expiring next year, tomorrow’s vote presents an opportunity for the DC Council to protect our lowest-income residents who have been systematically left out of DC’s growing prosperity. The draft Comp Plan also includes new language about DC’s vision for the future:

We must recognize that managing growth and change includes addressing the historic, structural, and systemic racial inequities and disenfranchisement of many District residents… An equitable and inclusive city includes access to housing that is healthy, safe, and affordable for a range of household types, sizes, and incomes in all neighborhoods.

The DC Council can uphold these values — which benefit us all — by preserving the current bill language at tomorrow’s vote.

Click here to add your name or organization to those asking DCHA to ensure that any redevelopment plans center the rights and needs of public housing tenants.

[1] We define “affordable” as spending no more than 30 percent of a household’s income on housing expenses – the federal standard of affordability. “Affordable units” refers to units that are affordable to households making 0-50 percent of the area median income (AMI).