A new set of policies proposed by the federal government would help make sure that DC residents have access to enough doctors in their neighborhood, when they get health care through Medicaid. That’s important to the 175,000 people who receive care from a Medicaid managed care company, especially since DC has seen a decline in visits to primary care doctors among these residents. The new rules would help ensure that a lack of doctors is not contributing to the decline in routine care

The District contracts out with three managed care companies that provide networks of doctors to serve DC’s Medicaid beneficiaries. Recent evidence suggests that the companies have fallen short in helping people access services and maintain their health, including making sure people see a primary care doctor. 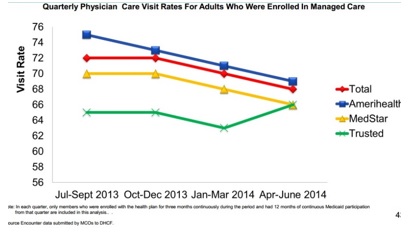 If health professionals are scarce in someone’s neighborhood, residents can face real barriers to getting the care they need. Much of Ward 7 and Ward 8 are designated “medically underserved,” due to a shortage of doctors, high rates of poverty and infant mortality, and population over age 65. Many residents in underserved communities rely on public transportation, which makes it important to have doctors and clinics that are readily accessible and close to where the live or work.

The new rules offer an opportunity to hold DC’s managed care companies accountable for having an adequate number of doctors throughout the city.

First, the rules would allow DC to build standards that reflect geographic accessibility (like in Wards 7 and 8) and that require specific minimum standards for the number of different types of doctors.

A second rule would require annual certification that each managed care company’s network of doctors meets DC’s standards — including direct compliance testing by DC regulators. Finally, the new rule would have DC hire a third party to review the managed care networks to see if they meet the new access standards. This independent analysis would add another layer of transparency.

The rules add more teeth to the way DC regulates managed care and ensure that these companies provide real access to services. All rules are up for public c

omment and we hope that advocates and DC government officials support them as new tools for accountability and quality service in our Medicaid program.

STAY TUNED: Next week, DC Fiscal Policy Institute will release a report on managed care networks and how these networks could improve with better standards and oversight.