DCFPI recently released reports on our city’s wage and income inequality gaps. Today we focus on one of the best tools to help close those gaps: the Earned Income Tax Credit. The EITC has proven effective at making work pay for low-and moderate-income working families by offsetting payroll and income taxes. It could have even more impact if federal and local lawmakers improved the credit for workers without children.

Over 57,000 households in the District benefit from the EITC, lifting an average of 14,000 people out of poverty each year. These households get a tax credit based on their wages and the number of children in their home, and if that credit exceeds the amount of taxes owed, they get the difference as a refund. In addition to the federal EITC, the District offers a supplemental EITC set at 40 percent of the federal credit. The federal EITC for a worker with two children and minimum wage earnings is about $4,900, and the DC EITC adds nearly $2,000 more. 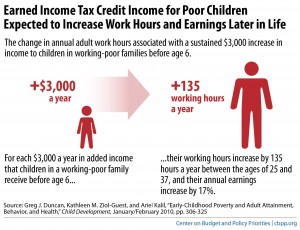 Those extra dollars not only help individual households but the District’s economy as a whole, because research shows that low- and moderate-income households quickly spend those dollars for food, rent, and other staples. The EITC put approximately $128 million into DC’s economy in 2011, according to the Center on Budget and Policy Priorities.

But while the EITC does a lot to help working families, workers without children in their home receive much less assistance. Because the EITC does so little for them, childless residents working at  the minimum wage are pushed deeper into poverty by their taxes, the only group for which this is the case. Giving a larger credit to childless workers would create a greater incentive to work and would pull more working people out of poverty.

In his 2015 budget proposal, President Obama proposed to make more childless workers eligible for the federal EITC and to increase the credit for those who already qualify. This proposal would cover or increase benefits for about 25,000 workers in DC while reducing poverty and boosting employment.DC’s Tax Revision Commission also recommended expanding the EITC for these workers, particularly if the President’s federal proposal is not adopted.

The EITC already helps thousands of low-income families across the city stay out of poverty and on their feet. Expanding it to cover other low-wage workers will do the same for thousands more while also rewarding work and boosting the economy.

To print a copy of today’s blog entry, click here.