The second round of DC’s minimum wage increase went into effect on July 1, instantly boosting the income and standard of living of tens of thousands of city workers.

The increase helps more people make ends meet in an economy where, increasingly, the biggest gains are going to a relative handful of people making the most money. Right now, a parent working full-time at the minimum wage earns less than $20,000 per year, which is below the poverty rate for a family of three. Meanwhile, those with the highest incomes continue to accrue more and more of the city’s wealth. The top 5 percent of DC households have incomes over $500,000 per year higher than the top earners in any major city. The city’s gap between the wages of low- and high-paid workers is the highest it has been in 35 years.

The minimum wage increase is one of several new labor laws in the District that will help DC working families. Others include expanding paid sick leave protections, ensuring the rights of pregnant and breastfeeding workers, and “ban the box” rules that prohibit employers from asking about any criminal arrests or convictions before making an offer of employment.

To help workers become more informed about their rights, the DC Department of Employment Services (DOES) is embarking on an initiative to distribute more information about workers’ rights and employer obligations. In that vein, DOES recently created a “Know Your Rights“ flyer that summarizes the new labor laws in the District. 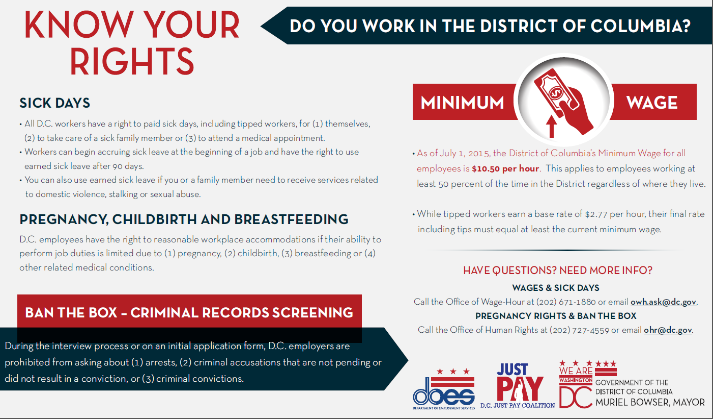 While these new laws will go a long way in helping more DC families make ends meet, further minimum wage increases may be warranted, considering that the District’s extremely high cost of living. Average expenses for the typical household are higher in DC than in any other metropolitan area of the country, according to the Bureau of Labor Statistics. The “living wage” in DC’what it takes to meet all basic living expenses’is $20.27 an hour for a family of four, according to MIT. Below that level’even for people above the federal poverty line’having enough money for food and housing is often very difficult.

With that in mind, efforts are underway to raise the minimum wage even higher. The DC Working Families Party is working on a ballot initiative to gradually raise the District’s minimum wage to $15 per hour. As more and more research shows, moderate increases in the minimum wage over several years improve workers’ standards and, contrary to the claims of opponents, don’t run the risk of increasing unemployment.