Federal and DC Tax Changes Are A Windfall for DC Residents With Incomes Above $500,000, But A Mixed Bag for Those Below $50,000
Skip to content
Back to the Blog >
Share :
Share this...

The District’s high-income residents will collect outsized federal income tax cuts in 2019 due to the new federal tax law, according to estimates from the District’s Office of Revenue Analysis. Low-income residents will see some benefits, too, but the combined effect of the federal law and linked DC tax changes will be a mixed bag for this group. Businesses in the District will see lower federal corporate taxes.

In the District, as in the nation as a whole, the new federal tax law will drive large benefits to tax filers with incomes over $500,000. Among other tax changes that will disproportionately benefit high-income filers, the federal law reduced the top marginal income tax rate (which applies to taxable income over $500,000)[1] by 2.6 percentage points, from 39.6 percent to 37 percent. These filers will see little change in DC income taxes proportional to either their incomes, or DC income taxes owed. 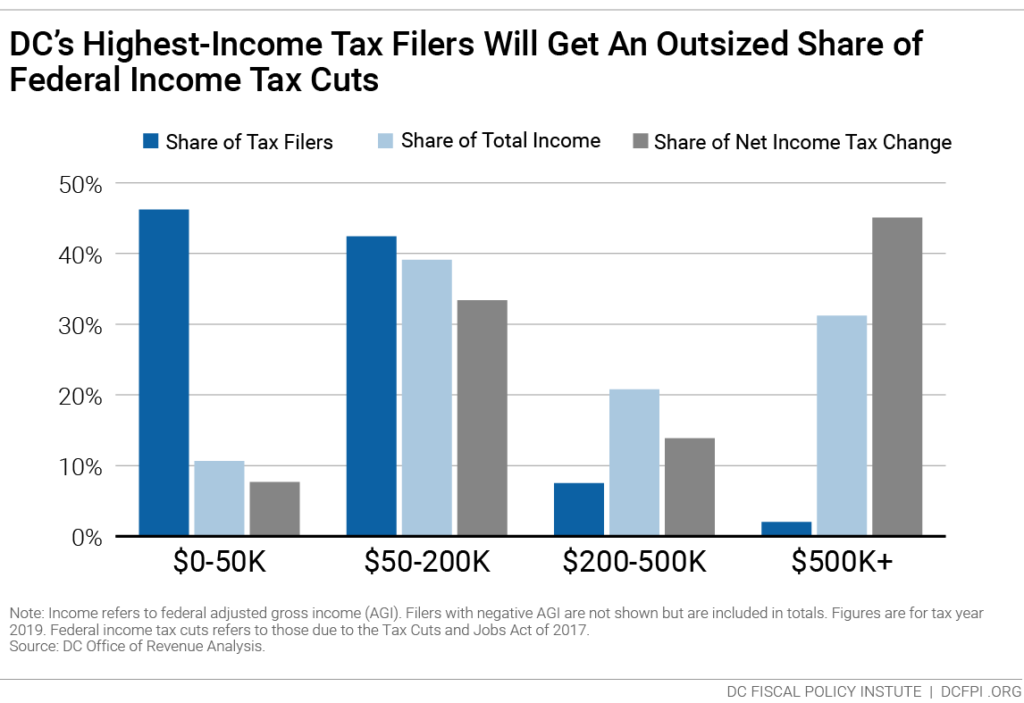 The federal tax changes and linked DC tax changes will be a mixed bag for DC residents with incomes below $50,000. These filers will be affected mainly by three components of the new federal tax law. The law nearly doubled the standard deduction, which reduces taxable income. At the same time, the personal exemption, a deduction that taxpayers can take for each member of their household, was eliminated. Because DC tax law links these provisions to the federal code, these changes will affect filers’ DC income taxes as well as federal income taxes. Meanwhile, the federal child tax credit was expanded, and marginal tax rates on the lower brackets were reduced.

The combined impact of these three moving parts on a tax filer’s DC and federal income taxes owed will depend on their circumstances. For instance, the increase in the standard deduction may not offset the personal exemption for tax filers with multiple dependents.

District businesses will see a $460 million reduction in federal corporate income taxes. The federal tax law reduced the corporate income tax rate and repealed the corporate alternative minimum tax. Neither of these two provisions affect DC’s corporation or unincorporated business taxes, whose rates have been lowered substantially in recent years. However, the law placed limitations on certain deductions, which will be reflected in the District’s business taxes, and raise DC business revenues by $2 million. Combined, DC businesses will see a $438 million reduction in their income tax liabilities.

DCFPI thanks the Office of Revenue Analysis for sharing their individual income tax estimates for this post. Read ORA’s report on the impact of the Tax Cuts and Jobs Act on the District here.

[1] For single and heads of household filers. The top bracket for married filers begins at $600,000.

[2] Throughout this blog, income refers to federal adjusted gross income (AGI). Filers with negative AGI are not shown but are included in totals.