DCFPI’s latest report, Revenue: Where DC Gets Its Money, details how and where the District gets its revenue to pay for everything from library books, to teacher salaries, to health care for lower-income residents. Our new and improved revenue primer also compares key DC taxes to those levied in surrounding Maryland and Virginia suburbs.

Along with our recently updated Budget Primer, A Citizen’s Guide to the DC Budget, DCFPI is working to give residents and other stakeholders alike a better understanding of how the city collects money, and how that money is spent.

DC government collected $10.5 billion in revenue in fiscal year (FY) 2015. Local tax revenue totaled some $6.4 billion, and most of the rest was federal funding. The three largest sources of tax revenue are property, individual income, and sales and use taxes.

The District’s individual income tax rates are similar—and in some cases lower—than Maryland’s, and higher than those in Virginia. It’s worth noting that many lower- income households get an income tax refund, mostly due to DC’s local Earned Income Tax Credit (EITC). A family of three earning $25,000 in the District, for example, receives a refund of $732. Thanks to DC’s substantial EITC, DC’s taxes at this income level are the lowest in the region. Over 57,000 households in the District benefit from the EITC, lifting 14,000 people out of poverty each year. 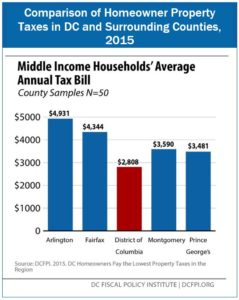 Sales and Use Tax

The sales and use tax is the District’s third largest revenue source. In FY 2015, the District collected $1.3 billion in sales and use taxes, including cigarette, alcohol, motor vehicle, and fuel taxes. This accounted for 20 percent of total tax revenue. The District’s general sales tax rate of 5.75 percent is lower than that in Maryland and Northern Virginia.

The District also collects taxes through business income taxes and commercial property taxes. Business income taxes raised over $447 million in FY 2015, which accounted for just under 7 percent of the city’s tax revenue. While DC’s business income tax rate is technically higher than in the suburbs, simply comparing rates can be misleading. This is because, first, most DC businesses actually pay the minimum tax, and also, other jurisdictions may have additional taxes that DC does not, such as the gross receipts tax that businesses in Virginia pay.

To read a copy of today’s blog, click here.