The District’s economy is strong, but not everyone is benefiting. Hourly wages for low-income workers have fallen in recent years, making it more difficult for families to cope with DC’s rising cost of living. That’s why the District’s efforts to help low-wage workers — the recent increase in the minimum wage and a substantial DC earned income tax credit (EITC) are so important. They are helping making work pay and helping low-income workers make ends meet.

The District is one of three jurisdictions to make improvements to both in the last year, according to a new report. The city raised the minimum wage to $11.50 per hour by 2016 and expanded the DC EITC for childless workers. Together they make an enormous difference. Consider these examples. 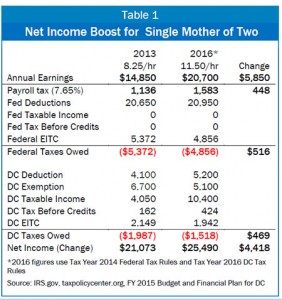 The tag-teaming of a strong earned income tax credit and a meaningful minimum wage has other important advantages.

Residents benefit from the EITC and minimum wage at different times. The higher minimum wage will mean more in paychecks, helping workers cover monthly expenses, such as rent, utilities, and child care. The EITC benefits families at the end of each tax year, and the lump-sum refund can be used to pay for large ticket items, like home repair or tuition.

With recent improvements, DC has made important strides to making work pay in the District. But as we move forward, the District must make sure that the minimum wage rises with the cost of living and includes all workers — especially workers with tipped wages who are now exempt.