Last Friday DC’s minimum wage increased to $11.50 per hour, instantly boosting the income and standard of living for nearly 64,000 workers’roughly 10 percent of the people who work in the District.[i] And thanks to legislation just signed into law, DC’s minimum wage will continue to increase to $15 per hour by 2020, and to $5 per hour for tipped workers.

Yet the value of this and other important protections for DC workers is only as good as the willingness of city leaders to enforce them, and in that regard the District can do a lot better. The minimum wage increase is one of several new labor laws in the District that stand to help DC working families. Others include expanding paid sick leave protections, ensuring the rights of pregnant and breastfee 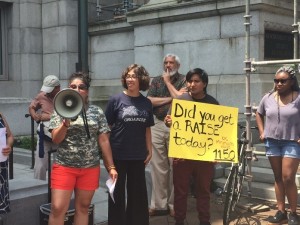 ding workers, and “ban the box” rules that prohibit employers from asking about any criminal arrests or convictions before making an offer of employment.

The DC Just Pay Coalition (of which DCFPI is a member) held a rally on the steps of the John A. Wilson building on Friday, both to celebrate the minimum wage increase but also to remind policymakers that the lack of strong enforcement of progressive wage laws has limited the actual gains for DC workers. Enforcing these laws in robust and intentional ways is imperative to ensuring that workers are fully supported and treated with respect.

At the rally, the coalition recommended the following improvements in enforcement at the Department of Employment Services: