DC’s recent efforts to boost the incomes of low-wage workers through its Earned Income Tax Credit are working, according to a new DCFPI analysis of DC tax return data. Over 10,000 more DC working families and individuals claimed DC’s EITC in tax year 2015, thanks to an expansion targeted to workers without children in their home, who previously qualified for only modest benefits. The expansion, recommended by the DC Tax Revision Commission and approved by the DC Council in 2014, put an additional $8.3 million in the pockets of the DC workers with low earnings.

The DC EITC, a refundable tax credit for workers with low earnings based on the federal EITC, is a key tool for reducing poverty among working families and individuals. The recent DC expansion addressed the fact that the federal credit for workers without children is very low. The DC Council more than doubled the value of the DC EITC for these workers, and expanded income eligibility so that more workers can claim the credit. The DC credit is now in the top tier of state-level EITCs in terms of its size. It boosts incomes by as much as $2,500 for working families with children and $500 for workers without children in the home. 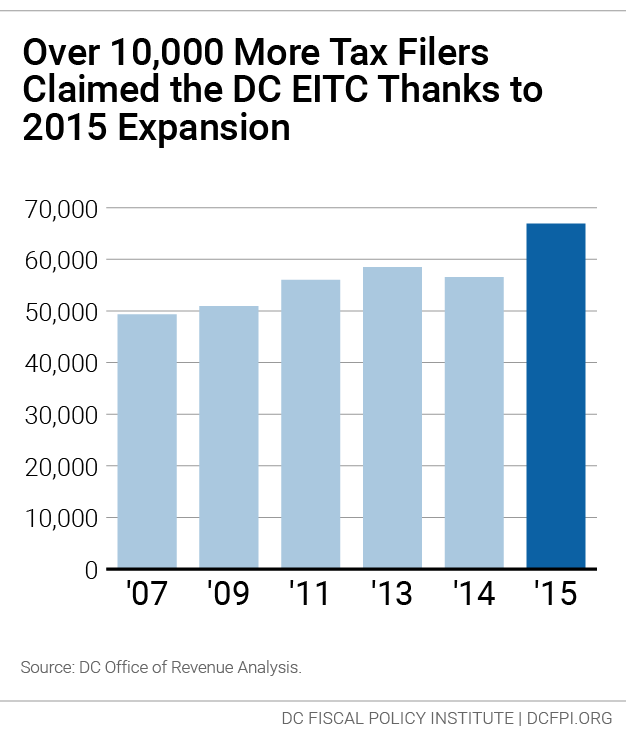 A new DCFPI policy brief shows that the expansion made a big difference for workers with low wages or limited work hours.

These figures confirm that expanding the District’s EITC has been a huge help to thousands of DC workers struggling on low wages. Boosting the incomes of DC’s low-income workers—the vast majority of whom are people of color—is an important step to make sure that DC’s growing prosperity is more widely shared.

Even with this good news, more work still needs to be done to ensure that all eligible District residents know about and claim the tax credits they’ve earned. According to Capital Area Asset Builders (CAAB), as many as 20,000 lower-wage DC residents are still not claiming the federal EITC, and thus not receiving over $40 million in federal tax credits. This suggests that with increased awareness and free tax preparation, even more workers would benefit from the DC EITC expansion.