New apartments affordable to low-income residents will be available throughout the city, thanks to a decision by the Zoning Commission to strengthen DC’s Inclusionary Zoning program.

Inclusionary Zoning (IZ) harnesses the District’s hot real estate market to create affordable housing throughout DC. IZ requires new residential developments to reserve 8 to 10 percent of the new homes at below-market rents or sales prices, in return for allowing greater density than normally permitted by zoning rules. Importantly, IZ can produce affordable housing wherever development is occurring — including in neighborhoods with access to public transportation, good schools, retail amenities, and job opportunities — without requiring tax dollars. About 900 IZ units have been built or will soon be coming on line in DC, with thousands more planned.

IZ is an affordable housing tool with tremendous potential, and thanks to a Wednesday night vote by the Zoning Commission, it will soon help more residents who are burdened by high housing costs. DCFPI and other affordable housing advocates had asked the Commission to revisit the program, which to date has largely produced units too expensive for DC families most likely to struggle to afford housing.

With the Zoning Commission’s decision, going forward all new IZ rental units will be within reach of families with incomes at or below 60 percent of the Area Median Income (AMI), or $52,000 for a family of two. IZ condos will be targeted to a somewhat higher income level. Because of this decision, IZ will generate over 2,600 apartments affordable to low-income families over the next five to 10 years, based on the pace of new development which has climbed to a 25-year high.

Before, the vast majority of IZ units were rentals targeted to households at 80 percent AMI, which amounts to a $ 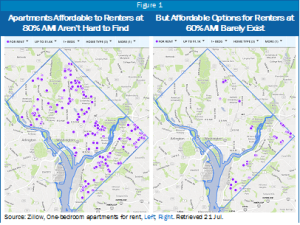 1,600 a month one-bedroom and is very close to private-market rents in most DC neighborhoods; this means that the current IZ program creates apartments for households who are largely accommodated by existing housing in the private market. By contrast, there are few rental units affordable to families at 60 percent AMI in DC, and they are concentrated in only a few neighborhoods (see Figure 1).

Thanks to the Zoning Commission’s move, thousands of low-income renter households who now pay most of their income for rent, will have expanded affordable housing options throughout DC, increasing economic diversity and inclusion in DC neighborhoods. The DC Council will likely join in support of the Zoning Commission’s decision: last year, the Council unanimously passed a resolution last year calling for strengthening IZ’s affordability.