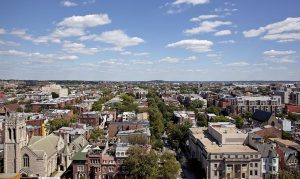 Mayor Bowser’s budget proposal leverages American Rescue Plan dollars for unprecedented increases in affordable housing production and preservation. To realize the fruits of that investment, however, more transparency is needed around plans for targeting assistance to residents with the lowest incomes. Furthermore, the Mayor’s budget misses other key opportunities to address DC’s housing crisis, like adequate funding for public housing repairs and additional tenant-based vouchers—areas that the Council should prioritize in order to create a more inclusive, equitable city.

Strong Investments in Housing Production but Plans for Execution Unclear

The Mayor’s proposed $400 million for the Housing Production Trust Fund (HPTF) in fiscal years 2021 and 2022 is historic and, if targeted as statutorily required, would go a long way in helping the District alleviate its affordable housing crisis. Doing so requires using District dollars to produce and preserve deeply affordable housing, defined as housing that’s affordable to households earning between zero and 30 percent of the DC median income (or $37,800 for a household of four). As of 2020, the District requires by law that 50 percent of HPTF resources support housing for these extremely low-income residents. In the preceding six years, that requirement was 40 percent and the Department of Housing and Community Development (DHCD), which administers the trust fund, met it just once.

DHCD has failed to meet its statutory targets due in large part to the inadequate operating subsidies provided through the Project Based Local Rent Supplement Program (LRSP). During a Budget Oversight Hearing on June 22, DHCD shared a breakdown of the funds for this program (Figure 1), showing a total of over $50 million in funding for new project based LRSP vouchers over the course of the four-year financial plan. DHCD stated that, for the first time, the annual incremental increases for the program were estimated based on the number of units that the agency intends to fund in order to meet statutory affordability requirements.

DCFPI urges the Committee to require that DHCD publish their plan for meeting the statutory requirement that 50 percent of HPTF funds be used to produce deeply affordable housing in FY 2022 and beyond. This plan should include DHCD’s assumptions about the per-unit operating subsidies required to achieve its estimated number of deeply affordable units in HPTF projects.  Additionally, the Council can ensure that HPTF dollars meet the District’s most urgent needs by adopting legislation similar to the HPTF Transparency Amendment Act of 2019, which had it passed, would have required public justification of decisions made during the consolidated Request for Proposals selection process.

The Mayor allocates just $22 million for public housing repairs and maintenance in fiscal year 2022 and an additional $35 million split over the following two years of the financial plan—far short of the $405 million that the DC Housing Authority (DCHA) has said it needs over the next six years. Both the Executive and DCHA have confirmed that the total allocation of $57 million for repairs will go entirely to just one building—Claridge Towers—while more than 80 percent of DCHA’s 41 buildings need urgent repairs.

Over 90 percent of DC’s public housing residents are Black, and most are being forced to live in deplorable conditions. Due to this nation’s history of racism and discrimination in policy and practice, Black people are already at higher risk of contracting and dying from COVID-19. In DC, 75 percent of COVID deaths are born by Black people. It is unconscionable to allow public housing residents to live in poor conditions at any time, but it is particularly reckless during a pandemic. The Council should allocate $60 million in 2022 for repairs at multiple properties to reduce racially disparate health risks for public housing residents and make long overdue progress. Last year, the final budget stipulated that DCHA must submit a proposed spending plan to the Council—a process the Council can use again to ensure the $60 million are well spent.

In addition to providing operating subsidies for deeply affordable housing production, the LRSP also provides some vouchers directly to households to help them afford private-market apartments; these are known as “tenant-based vouchers” and administered by the DC Housing Authority. Prior to the pandemic, nearly 60 percent of the District’s lowest income households—those earning less than $20,000 annually—were severely cost burdened, meaning they spent more than 50 percent of their income on rent. Over 40,000 DC households were on DCHA’s waiting list for vouchers and other supports.

The Mayor’s budget fails to increase assistance for tenant-based vouchers despite the incredible level of need. The Council should make new assistance to reduce DCHA’s waiting list a major priority. DCFPI and its partners recommend an investment of $17.3 million to provide tenant vouchers to 800 families on the DCHA waiting list in FY 2022.

In addition, the Mayor proposes increasing the efficiency and transparency of tenant and project-based LRSP funding and administration in the Budget Support Act, such as giving DHCD and the Department of Human Services more power to control LRSP spending. However, several questions remain about this new process, including a new category of capital-based assistance for housing production and rehabilitation run by developers and nonprofits. Although DHCD said that nothing will fundamentally change due to the new capital-based allowance, DCFPI encourages the Council to use the budget oversight hearing for DCHA government witnesses to seek additional clarity on proposed BSA changes.