We’re in the final stretch of the DC budget process, when the DC Council will have the opportunity to make large strides towards an anti-racist, equitable recovery. Councilmembers are weighing choices that have the potential to usher in bold, transformative investments that meet the urgency of this moment. Yet misguided worries about “tax flight” are giving some Councilmembers pause. Research from real-world examples shows that, by and large, people don’t make decisions about where to live based on taxes. In fact, every state that has raised taxes on the wealthy has raised more revenue because most high-income residents stay.

The Federal City Council (FCC) launched a petition that opposes raising taxes on DC’s wealthiest to fund critical investments in two public goods that make us all better—housing vouchers and higher wages for child care educators—despite the importance of these investments to DC families and the 80 percent of voters who say we need to fund them. The Council is poised to vote tomorrow on an income tax measure that will save the lives of people dying on the streets due to a lack of housing and support early education teachers who struggle to get by even on full-time wages. The measure would raise income taxes on high-income residents who make more than $250,000 in taxable income—a tiny share of taxpayers overall.

FCC points to the DC Policy Center’s analysis of IRS migration data showing that, on net, more households with incomes above $200,000 moved out of DC than move in between 2011 and 2019—but that net out-migration has been relatively stable. It’s certainly true that northeastern and midwestern states have experienced “net out-migration” for decades, so this wouldn’t be an unusual pattern for DC. However, it may not be the case: there is some evidence that the IRS migration data are flawed. New academic research points to major data limitations—primarily that the most recent data “are not directly comparable” to data from prior years. In particular, researchers have noticed wild fluctuations in the rate of gross migration and recommend that other researchers “beware” of the dataset and not use it until problems can be rectified.

The latest American Community Survey data paint a different picture. For the three-year average between 2017-2019, the Census data show:

This influx of high-income residents to DC came after the last income tax increase on high-income residents took effect in 2017. Similarly, the number of District millionaires has risen sharply and steadily—growing by more than 80 percent between 2010 and 2018. The idea of tax flight—or residents moving en masse because of taxes—is unfounded and has been roundly rejected by scholars and other researchers again and again. In fact, reductions in housing costs, not taxes, are what save families the most money when they move from states like New York and California to states like Texas and Florida. Households with higher incomes have moved to DC presumably because they like the jobs, closeness to family, or lifestyle that it has to offer.

The FCC also makes the claim that an income tax increase on the wealthiest residents will hurt small businesses in DC. Yet the District remains a very attractive place for high-income people to live and to own pass-through businesses. Examples of these businesses include law firm partners, accounting firms, and self-employed companies; and instead of paying the unincorporated business franchise tax, they pay through the personal income tax. The number of high-income tax returns and high-income tax returns filed with S corporation or partnership income rapidly increased between 2010 and 2018 (Figure 1), varying by income group. Tax returns from individuals earning adjust gross income between $500,000 and $1 million more than doubled, producing the greatest increase, compared to the $200,000 to $499,999 and $1 million-plus income ranges. 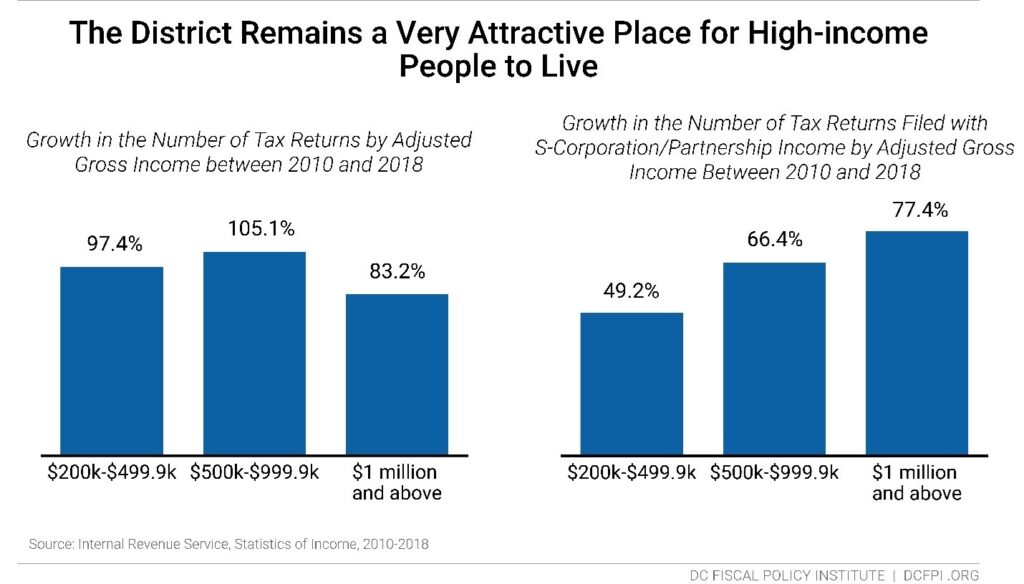 At the end of the day, an income tax increase would ask those doing well—making income and profit over $250,000 (after deductions)—to contribute to our collective responsibility. Doing so will help create a just recovery that extends to all residents and an equitable future economy that enables all to thrive.